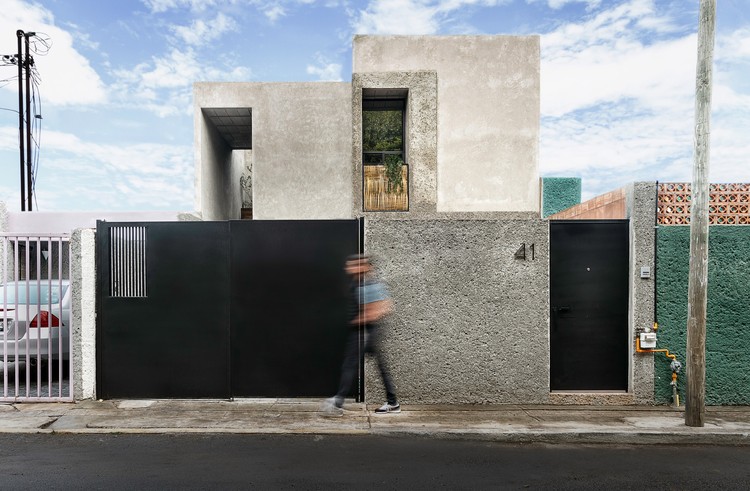 Text description provided by the architects. Casa Estudio is an urban regeneration project that brings a deteriorating house originally built in the 80s back to life, located in a micro industrial area of the city.

The understanding of pre-existing conditions led to a subtle intervention of the space with a system of patios and honesty in the construction methods.

The main challenge of the exercise was to do more with less: to solve an architectural scheme that extends a studio space on the ground floor, which separates from a new apartment on the first floor, and to maximize the living space, inside and outside. The aesthetics and form of the project rely on function and the use of apparent materials.

The usage of a series of patios allowed the house to be naturally ventilated and illuminated. Lining the walls with clay, a regional material that carries strength and contrast, renovated the space like lungs for contemplation.

Given the effort to abide by a certain budget the materials are completely exposed, naked. This urged the quality of manpower to be extremely high, due to the fact that the brick, slab, and beam and vault that were used stayed as final finishes. This represented great education for the team on regional construction methods. Vernacular textures were also used, found in the nearby area of the city. Such was the case of “junquillo”, a type of palm with a knotted stem, great strength and at the same time flexibility due to its height, found in Bucarelli, a region in the Sierra Gorda Queretana.

The project understands and respects its context, but it also accepts its limitations. Casa Estudio remembers its worthy past and responds to the necessities of those who inhabit it to make it a live-work space.