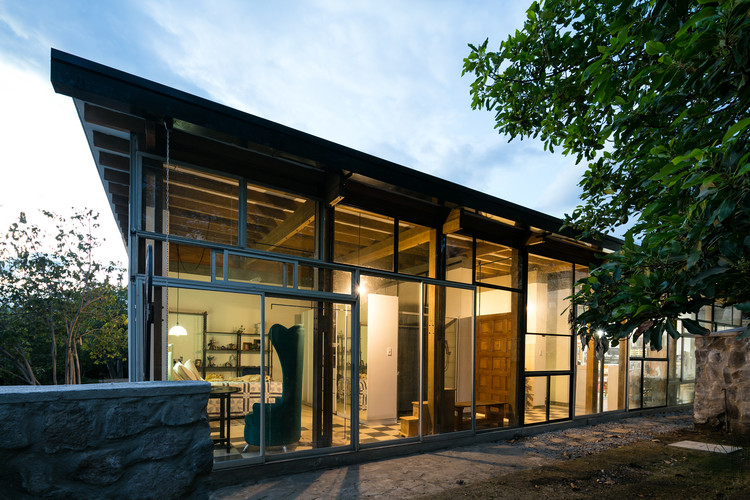 Text description provided by the architects. Don’t throw anything away. That was the first request the client made for her new house in Guayllabamba, Ecuador. Patchwork and quilting are not only her work, but also her philosophy of life, so she tries to recycle everything she can. The second request was to find solutions for the house on one single level. This would allow comfortable access for her and her mother, who would also be her neighbor in an already existing house just a few steps away from hers.

These two requests would become the basis of the design. All decisions were made with the intention of not throwing anything away and taking advantage of all the materials we had on hand.

To begin, a single-level floor plan involved clearing out a large amount of earth. This earth was then used to build the mud walls that became the main structure of the house. In addition, almost all the windows, doors, and cabinets were recycled from the client’s previous home. Everything was recycled as a patchwork design. Materials that would seemingly be considered useless or not worthy were made to work by means of different systems. The windows were joined together and adapted to the wooden columns and mud walls; restored doors were hung from the concrete beams; restored and rebuilt cabinets were adapted to fit in new spaces, and old gates and fences were used to enclose the new garden.

The three-meter tall mud walls are arranged in a “C” shape for structural rigidity, which is basic when constructing with rammed earth. The “C” walls shelter the private spaces of the house, which are then closed off with the recycled windows and doors. On one side of the house are the quilting studio, the main bedroom, and the laundry/pet room. These areas allow the owner to withdraw into her own private space even when the house is full of people. This entire side of the house opens out to a private garden through a collage of recycled windows. On the opposite side of the house, three guestrooms are laid out as small yet complete spaces in which to rest.

The large open living space is located between the two private side wings, and constitutes the central and most important space in the house. This area draws one towards the outside view and recreational zone where family activities are closely related to nature. The inside walls of the house are painted white so that the patchwork wall hangings can stand out.

The roof consists of a system of wooden beams, tensioned trusses and a thin concrete slab. Several skylights provide proper lighting for the guestrooms and the corridor leading to the owner’s private quarters.

The outdoor area consists of a large avocado and custard apple orchard. The exterior finish of the house is minimal, where the mud walls retain their original aspect, flanked by the recycled windows.