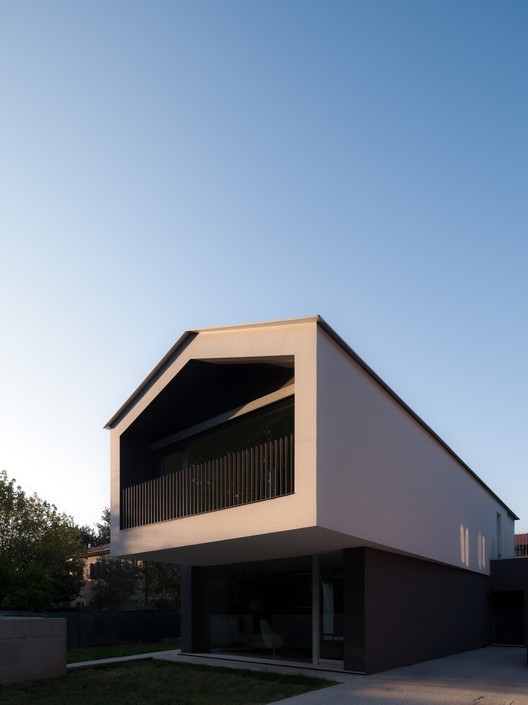 Text description provided by the architects. The house is located in the first outskirts of Treviso, between others residential sites.

The place was previously occupied by a typical house characterized by a two slopes roof, main elevation towards south, rectangular plan and east/west orientation.

The house had been built along the north edge, leaving a great empty space on the south.

We could only increase the building in that direction, the only one with right distances from the neighbors.

After various studies, we decided for a “T” shaped volume, maintaining the original part and imaging the extension like a graft.

So this started to develop an interesting theme: to represent the housing archetypical form instead having a plan not representing the housing typology.

After sketches, models and various proofs we have been convinced about this realized form.

In this fase, it was very important to study the vertical distribution of the house. The stair become the foundamental tridimensional pivot of the building: the architectonic element that, linking the two plans, allow the circulation absorbing the slipping of the levels.

In fact, by going up the stair, we realise that the first level is slightly rotated compared to the ground one: this movement became the aim of the project.

We worked with the two slopes roof form in various other projects, after and before this one, starting from this basic shape.

We worked with this by breaking it, empting it, adding volumes, making them sliding rather than rotating, following the raunplan Loos logic. This form modification have a functional meaning: to adapt the archetypal house form to the ever new needs of living, trying to make the house the place of comfort, of family warmth, of everyday actions.

The purpose is to make every family being able to live inside a space made by one-another organic spaces.