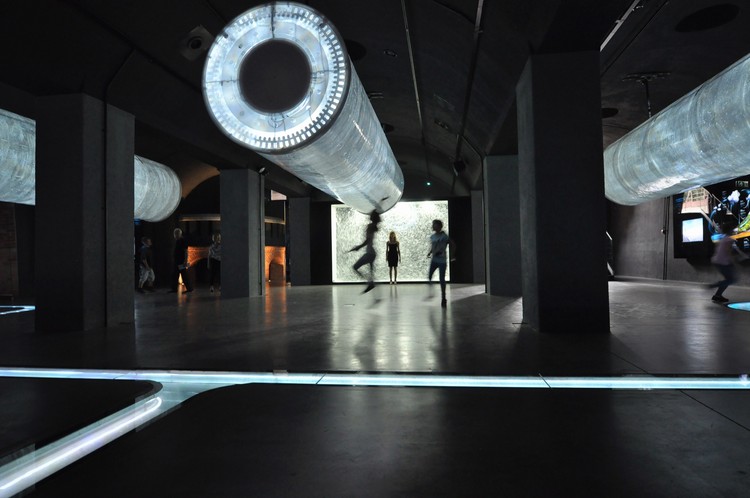 “Hydropolis” was established in an underground clean water reservoir. It belongs to the Water & Sewage Treatment Company - Wrocław and is one of the architectural monuments of the water supply system.

The clean water reservoir was built between 1890 and 1893 as one of the elements of the water supply system “Na Grobli” and originally served as a filtering system until 1904. The pumping station adjacent to it from the west was built in 1924.

“Na Grobli” is one of the few so well preserved historical water supply plants in Europe. As a site entered in the register of monuments, it is subject to strict protection and conservation. After the building was closed down, its further degradation could only be prevented by adapting it to new general interest functions.

The clean water reservoir, the old filters, and the pumping station adjacent from the west to the reservoir, are part of the “Na Grobli” water supply system. The reservoir cross section has a rectangular shape measuring approx. 72.8 x 63.9 meters. It is covered with a green roof, with air vent stacks which primarily served to reduce the air pressure within the reservoir.

The western and eastern elevations are in the historicist Neo-Gothic style with towers steeples, fortified towers, turrets and gates. The northern elevation includes twelve semicircular arcades, while the southern elevation formed  an earthen slope dropping from the roof level. The façades are built of ceramic face bricks with details underlined by glazed bricks and shaped ceramics.

The interior of the reservoir consists of four chambers which, for the purpose of the new function, are connected via openings made in the walls allowing to pass from one section to the other. Each chamber is covered with a three-bay reinforced concrete arched structure resting on the walls separating them and two rows of pillars.

An annexe building was constructed on the southern side of the entrance zone creating a new façade which matches the Water Tower situated nearby.

The predominant material used in the new part of the building is classic copper which due to the process of oxidation darkens in a natural way, harmonising well with the brick – the main material of the reservoir and Water Tower.

The building façades were covered with horizontal copper plate panels. Sliding perforated panels were used for covering the glazing at the entrance point, whereas the fixed panels mounted on both sides of the façade  together with the roofing are the framework for the water printer measuring 46.5 meters in length. The water falling from the printer creates pre-programmed patterns and captions – a prelude to the theme of the exhibition  and the main primary accent of the entrance elevation.

Thus created water curtain fills the front elevation. It constitutes its integral part. It opens up in front of the passing visitors allowing for interaction and first contact with water.

The water printer is made up of twelve modules concealed beneath the copper lining of the elevation, connected with the technical section of the building. Each module has a set of controlled solenoid valves and nozzles responsible for the effects created by the printer. The water in the printer circulates in a closed system.

Copper is also the finishing touch of the entrance hall; it illuminates the interior and harmonises with the matt surfaces of black metal sheets, slabs of concrete and reinforced concrete. The sunlight penetrates through irregular holes in the perforated panels, fills the space and creates a unique interplay of light and reflections. Pre-oxidised vertical panels of copper sheet are used here.

The main accent within this space is a vortex captured within a closed transparent cylinder measuring 2.8 m in height and 1.6 m in diameter. It is located centrally between the staircases on level -1.

The decision to use copper from the beginning seemed to be the most appropriate solution. Because of its durability, beauty, and natural variability, the new part of the building covered with copper sheets complements the unique character of the historic reservoir at the same time emphasizing its new architecture. Used inside, it intensifies the perception of space in the hall thanks to its subtle glow and reflections. 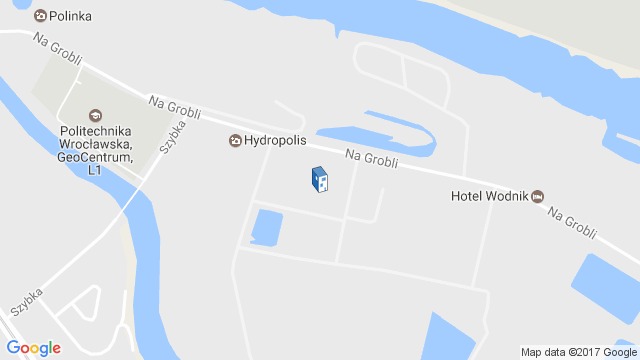 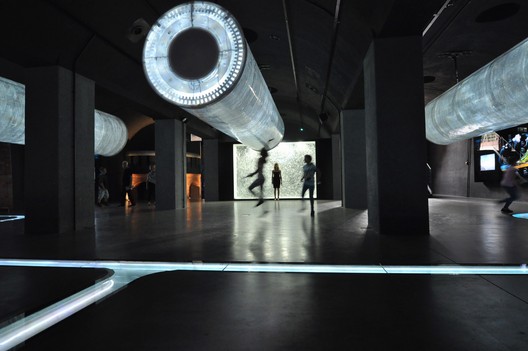