Save
Microsoft Unveils the Surface Studio, a 28-Inch Touch-Screen Drawing Board

Today, Microsoft announced the latest in their Surface family of personal computers. Called the Surface Studio, the device is essentially a 28-inch touchscreen drawing board which the company is targeting specifically at creative professionals, potentially placing it at the top of many architects' wish lists.

Central to the design of the all-in-one desktop device is the "zero-gravity" hinge, which allows users to adjust the screen orientation to any point between a desktop-like vertical configuration down to just 20 degrees off horizontal, where the desktop will act more like a drawing tablet. And the screen supported by this hinge is quite a feat of engineering in itself: the 13.5-million pixel display--that's 192 pixels per inch--offers 63% higher resolution than a 4K television, according to the Verge, all within a 12.5-millimeter-thick frame that is being marketed by Microsoft as the "world's thinnest LCD monitor ever built."

Rounding out the 3-part design is the base, which contains all the internal workings of the PC. As a device aimed at the high end of the market, this also contains some impressive hardware: the top of the range model features Intel's i7 processor, 32GB of RAM, a dedicated 4GB graphics card and 2TB of internal storage.

Alongside the main device, Microsoft has also unveiled a series of accessories designed to work specifically with the Surface Studio. The screen still works with the Surface Pen, which is included with the portable members of the Microsoft Surface family, but the most notable new addition for designers is the "Surface Dial," a small cylinder which allows access to contextual menu options when placed on different parts of the screen.

The prices announced by Microsoft today range from $2999 for the entry-level 256GB, i7, 8GB RAM model, up to $4199 for a 1TB, i7, 16GB RAM model. However, the Microsoft website lists specification options both lower (eg the option for an i5 processor) and higher (such as that 2TB, 32GB RAM model), so it seems likely that a wider range of models could be released in the future. 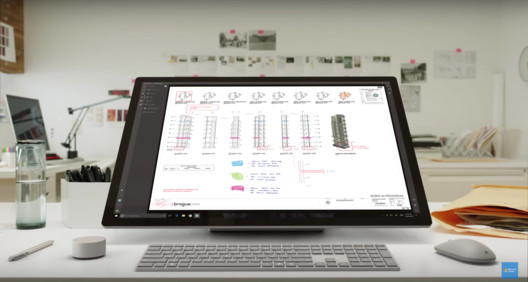