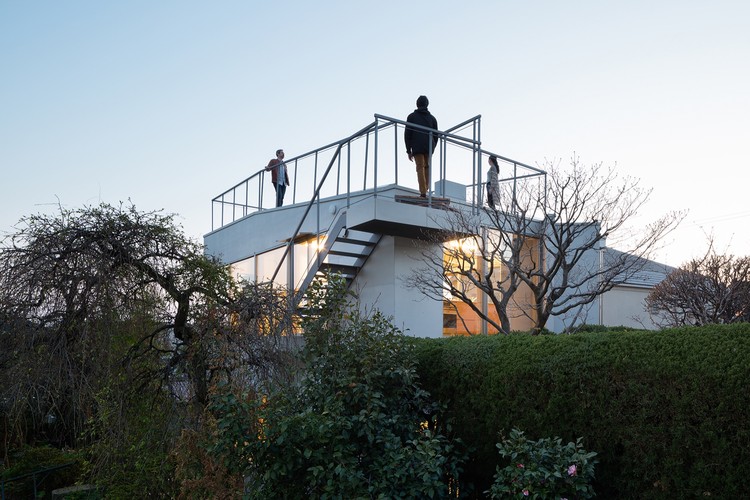 Text description provided by the architects. With a flag shaped site, bound on every side by close neighbors, the understandable instinct might be to step away from the city, retreat behind walls where privacy is better assured. The family that purchased the site saw instead a chance to be as open as possible, using the small degree of isolation as an opportunity to connect to the metropolis from a slight remove. Although the neighbors are close, the tendency in Tokyo is to reject the city and build closed walls, ironically allowing the family to take the opposite stance and open their home without loss of privacy. In this way the site is not unlike a clearing in the midst of a forest.

The deck and landing for the stairs to the roof are oversized so the family can spread out in every direction during the day. On the ground floor a similar openness defines the plan. The concrete floor extends outwards and becomes a landscape, softened by an abstract form that blurs boundaries - not between inside and out, but between city and home. As megacities go, Tokyo is particularly suitable to this approach. Benign and accepting of individual expression, it affords access to sun, air, and space if the starting point is one of acceptance rather than rejection of the urban condition.

A small budget required that we built with wood, and as simply as possible. A wooden structure in a disaster prone area normally works against our ambitions, requiring substantial sheer walls or braces to resist earthquakes. To answer this need large X-shaped walls are placed at either end of the home. Acting like buttresses, the structure is set outside the plan without interfering with the desire for openness.

The first floor and second floor are each treated as single rooms, with boxes holding bath and toilet working as rough dividers in the open plan. The height of the second floor was set so the family could see out to the river valley from their living room, looking over the roofs of their neighbors in the hilly site. Taking advantage of the 3 meter high ceilings on the first floor, a large long-term storage is hung from the ceiling, freeing up floor space for daily life. The storage defines the master bedroom and is incidentally used to hang a group of large doors that can close off the bath and the bedroom as needed.

Product Description. Compressed concrete panels were used as the principal exterior finish and on the interior to cover the wood brace structure as well as the WC on both floors. The finish connects inside and out, applied with screws and a rain screen on the exterior, and glued on the interior over a plywood underlay. 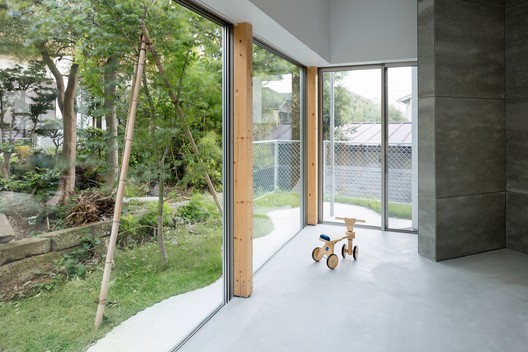