Viger Square, Montreal's first large square, is getting a makeover. The redevelopment project is being led by landscape architects NIPPAYSAGE, which will begin the first phase of redesign in 2017.

Historically, the 30,000 square foot center has always contributed to the liveliness of the city, and it was the largest square in Canada in the 19th century. Now coinciding with the adjacent redevelopment of retail and office spaces at the Viger Hotel, the city hopes for a major revitalization of the area. 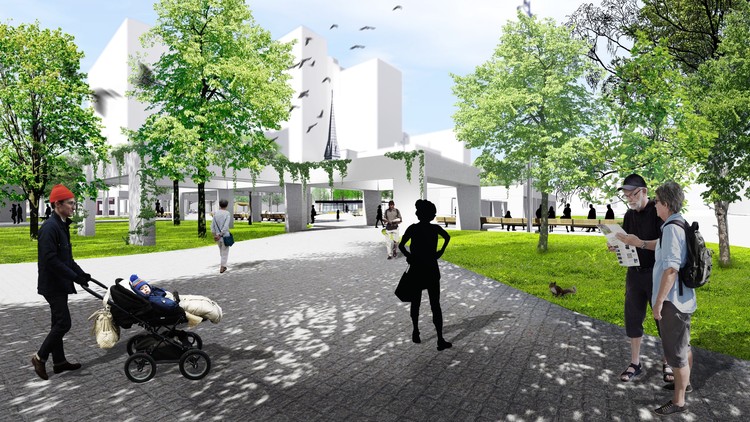 The square’s previous design and development reflected the planning ideologies of the time, including highway-like roadways surrounding the square, the separation of the blocks with concrete walls, a large number of compartmentalized spaces, a lack of openness, light and natural sightlines, and a shortage of programming and other efforts to encourage people to use the space. All of these factors inevitably contributed to the abandonment and eventual occupation of the square by a marginalized population, said Michel Langevin, a partner at NIPPAYSAGE, in the press release.

NIPPAYSAGE's goals for the project include user-friendliness, inclusiveness, anchorage of the surrounding area, and a "commemorative element." The eastern end of the square will feature basketball courts, a skateboard park, and numerous playground structures. Another section will feature a more traditional look with sprawling parks and large trees.

The landscape architects intended to showcase public art and lots of green. On Daudelin Block (nearby the square) a new cafe, currently under construction by Provencher_Roy architects, will also bring some energy to the area. Moreover, the square will also serve as a venue for concerts, festivals, and other types of performances.

In addition, the firm has managed to preserve 18 pergolas (minus their roofs) along with the Mastodon sculpture, which were all originally designed by Charles Daudelin. NIPPAYSAGE hopes for these to add to the composition of the overall park, integrating them into its new sustainable landscape.

Lighting for the square was designed by Lightemotion, who intended for the light to showcase certain works of art without overwhelming the vegetation.

NIPPAYSAGE was first recognized when it won a Canadian competition for the design of the Promenade Smith in Montreal.