The Kohn Pedersen Fox-designed One Vanderbilt Avenue broke ground today, beginning construction on what will stand as the second tallest tower in New York City upon completion. Located adjacent to Grand Central Terminal on 42nd Street, the tower will be integrated into the its neighbor through a series of underground connections and $220 million in improvements to Grand Central’s infrastructure. 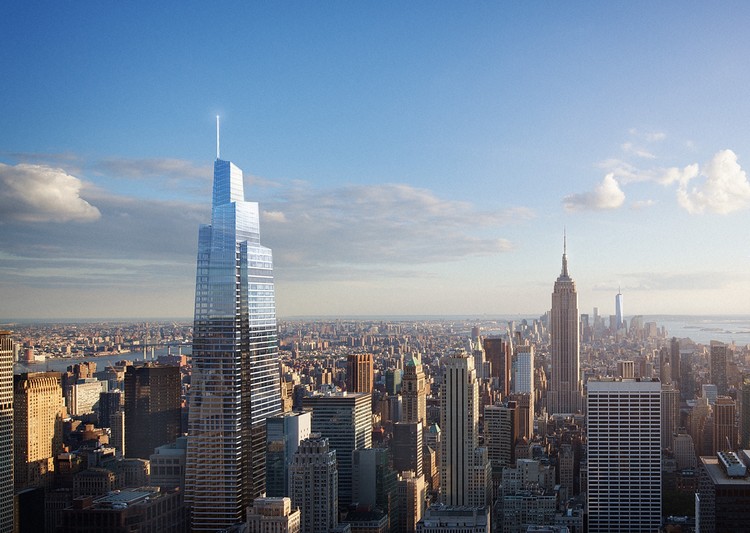 Developed by SL Green Realty Corp, One Vanderbilt will encompass an entire city block between Madison and Vanderbilt Avenues and will rise to a pinnacle at 1,401 feet, five feet taller than the city’s current second tallest building, 432 Park Avenue. At the building base along 42nd Street, the facade will be pulled back at an angle to reveal Grand Central’s majestic Vanderbilt cornice, which had been obscured for nearly a century.

The tower will contain 1.7 million square feet of office space on 58 column-free floors that feature fully glazed walls and higher than standard ceiling heights, while a 30,000 square-foot amenity floor will feature world-class dining. The building is expected to obtain the highest possible LEED certification.

“One Vanderbilt will not only emerge as an elegant, tapered new icon on the New York skyline, but will also serve as a leading example of a global trend of connecting train stations to tall towers, said James von Klemperer, FAIA, RIBA, President of Kohn Pedersen Fox Associates.

“This building will change its neighborhood for the better. It will provide a new gateway to the city made possible only through the unusually harmonious partnership between architect, developer, and the City of New York.”

Included in SL Green’s $220 million public infrastructure upgrades will be a new “jewel box” transit hall in the base of One Vanderbilt, a public plaza on Vanderbilt Avenue, and improved circulation into the Grand Central Terminal complex.

Construction will be managed by Tishman Construction, and is expected to be completed in 2020.