Detailed descriptions of the winning Bee Breeders' Tokyo Pop Lab proposals have been released. The competition brief called for a new program for studying and producing pop culture media in Tokyo. Drawing from a wide range of international pop culture history, entrants were encouraged to investigate the migration and evolution of pop culture across the world over time, and examine the relationship of culture and architecture.

In challenging established typologies of pop culture, proposals exhibited a wide range of ideologies. Successful submissions were chosen for their nuanced depictions of pop culture, clear representation, and coherent agendas for the new laboratory's program.

Take a look at the winners of the Tokyo Pop Lab competition after the break. 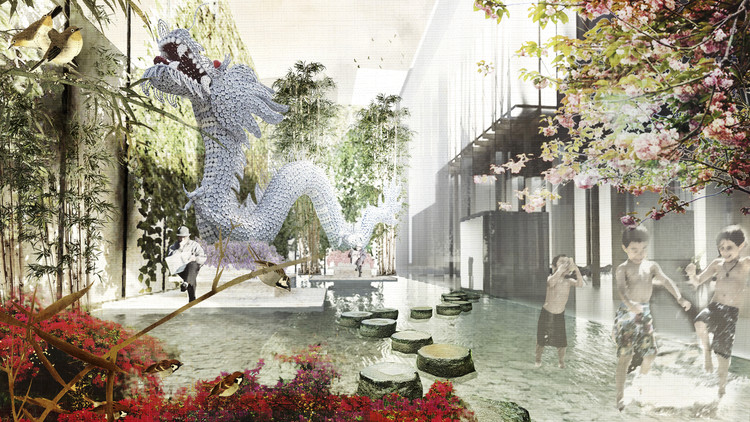 The success of the first place proposal lies in its clarity of massing combined with a strong formal and conceptual position in response to the brief. The project consists of two large cubes placed in opposing corners of the site, lifted above the ground plane, and rejoined with an elevated walkway. One cube contains the mass media research component of the program and the other holds an undefined space of “manifesto” and experimentation, represented by an inflated red balloon waiting to pop. This cube is adorned with two-dimensional imagery in the form of full-height fabric tapestries, obscuring the container behind an ephemeral veil of fluctuating media. At grade, a concrete wall separates the sidewalk from a public courtyard/gallery and other public program. From the street this wall only allows views of the binary cubes, generating the sense of a separate and inner world.

Importantly, the project does not restrict pop culture to a particular form or a particular moment in time, but rather seeks to create a generic space and empty architecture, perpetually inflating with the exploration and representation of mass media and pop culture. The stripped-down but well-articulated construction of steel and concrete allows the project to successfully navigate the minefield of contemporary and traditional pop iconicity, deftly avoiding expected representational tools. Through its massing and tectonic assembly, the proposal takes a stance on the role, power, and ephemeral nature of the consumed image, keying in on the “manifesto” as the cultural appropriation and critique of the never-ending cycle of production and consumption.

The second place entry is distinguished through its definition and organization of public program and social activity. Diagrammatically, the project can be described as a civic pavilion, interrupted variously by hoisted volumes of discrete, localized activity. Below and in-between these floating volumes, urban life extends seamlessly into the building, perhaps resembling most closely the precedent of a colonnade or piazza. Through an open, and carefully considered plan, the scheme establishes an urban, public forum for popular culture.

The project uniquely inverts the traditional model of a contained exhibition space by distributing media throughout the primary public space — the circulation surrounding the differentiated volumes. Within each of the distributed volumes, academic functions including classrooms and a lecture hall, are contained. Rather than assume a singular or limited expression, the proposal establishes a forum to exhibit, celebrate, discuss, and debate, the ebb and flow of popular culture in its various forms of expression through thoughtful programming of public space.

The chosen third place winner is notable for its clarity in thought and purpose. The project is organized around three conceptual and programmatic elements, including a distorted cube, an adjacent parterre replica from the Palace of Versailles, and a nested, infinite white void. Discrete yet cogent, the project oscillates between these elements, describing through architecture a critical, reflexive position of popular culture as a social phenomenon.

The project’s enclosure and signifying form is singular and definitive. A moderately inflated cube adorned by a glazed membrane produces a distorted reflection and interpretation of the building’s surroundings — of both the city, and local popular culture as it were. Occupying the other half of the site, the replicated Jardin de Versailles is overshadowed. Through juxtaposition, the inflated cube and Baroque replica provoke a striking statement concerning the contrast between popular and elitist culture — the former a phenomenological reflection of the immediate present, the latter a reference to historic propriety. The interior is anchored by an exhibition room, materialized as an infinite white void and described as a canvas for individual, cultural expression. Collectively, these three elements describe and thereby accommodate the dynamism of popular culture, a byproduct of social reflection, historic legacy, and individual expression. 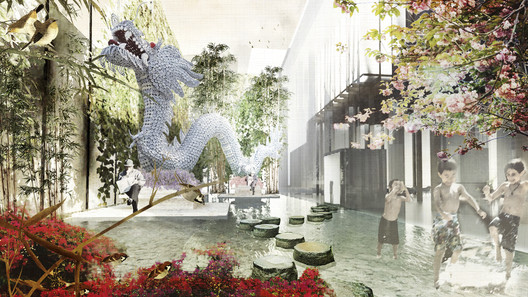