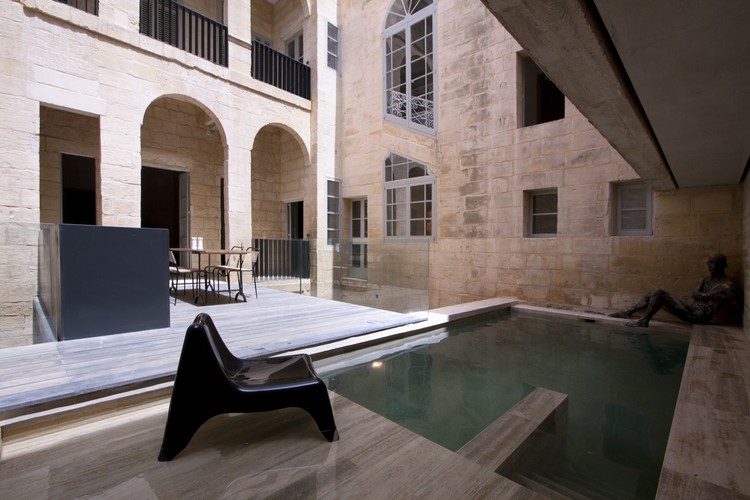 Text description provided by the architects. A few years ago, an Englishman called Ray came to Malta and fell in love with Valletta. He scouted the entire island looking for a holiday home, but when he discovered Valletta his search was over. He found out about our studio after visiting a restaurant we had designed in town, and a few days later he came to my office and asked me to go see a property he was about to put a deposit on.

It was a unique house by Valletta standards. Not only were the rooms extremely spacious, but it also enjoyed a garden in the basement with all the main rooms overlooking it. In this sense, the house was fully introverted – an attribute that well suited Ray’s desire for privacy. But apart from limestone, there was little which spoke of Valletta.

There were no windows onto the street, and nowhere inside the house could one catch a glimpse of a Maltese balcony or a Valletta streetscape; until we walked up to the roof. There, just as we walked out on the roof trough a small doorway after the garigor, was the dome of the iconic Carmelite Basilica. I told Ray we have to somehow capture this view and exploit it. He said he wanted to build a penthouse suite up here; since it was surrounded by higher party walls everywhere and his privacy issues once again came into the picture.

This became the turning point and the main design challenge of the initial design. Building an introverted penthouse suite abutting the surrounding roof walls, while still catching a glimpse of the most famous dome in Valletta. The problem was that the dome was only visible from this one particular doorframe, since as one walked out onto the roof, the dome slowly disappeared from view. So we took a site plan of the neighborhood, traced two lines from this point and projected them over to the dome. We had to convince Ray that the resultant triangular void would be left unbuilt, and the penthouse had to be designed around this void to secure the dome view, and frame it upon climbing to the penthouse via the garigor.

A few meetings later, Ray confessed that he owned a weekend house in London, designed by the world-famous minimalist, John Pawson. As much as he loved spending time in this house, he complained that it was too much of a white sculpture in its own right, and whenever he wanted to put up a work of art from his growing collection – it simply didn’t feel right.

Ray’s Valletta house would need to provide what his Pawson house could not – a friendly space for artworks of all sorts; paintings, sculptures, eclectic furniture and large objects … with the masterpiece sitting on top of them – the Valletta dome duly framed on top of his house-cum-art gallery.

This is one of the most beautiful houses we have built in Valletta. Ray turned out to be a tremendously insightful client. Not only did he understand the importance of framing the iconic dome, but he was also keenly responsive in dealing with the delicate balance between old and new – with the use of traditional materials such as lime and contemporary concrete.

Ray has been coming to Malta over the past four years, and he rarely left Valletta. Now that his house is complete, he visits Valletta more often than ever, and confesses that he rarely leaves the building. 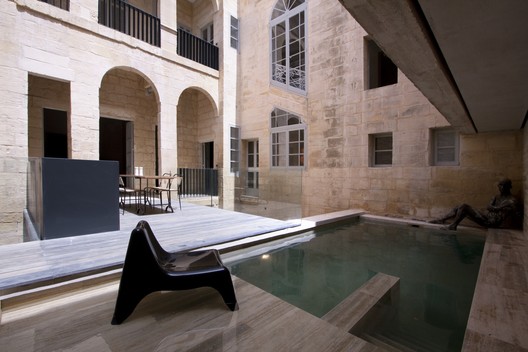