This article is part of our "Material Focus" series, which asks architects to elaborate on the thought process behind their material choices and sheds light on the steps required to get projects actually built.

In this exceptionally imaginative and thought-provoking exercise in perceptual shifts, Ithaca- & Brooklyn-based CODA transformed hundreds of humble plastic lawn chairs into a project in the Arts Quad at Cornell University. Viewed from afar as a spiky singular entity, close inspection reveals the simple, unpretentious repeated module. CODA explains, "the object’s features are no longer understood in terms of their use (legs, arms, seat) but in terms of their form (spikes, curves, voids) as, due to their rotation away from the ground, they lose their relationship with the human body." We asked Caroline O'Donnell, principle at CODA, to explain the challenges faced in the development and construction of the fully-recyclable URCHIN.

We were interested in using an everyday object to play with the perception of the object. From afar, the aggregation appears as a singular (and furry) designed object. Upon approach, the viewer realizes that the unit of aggregation is a familiar object: a common chair that they have sat in before.

It was important not to damage the chairs in order for them to be reused after the pavilion is demounted. We needed to make minimal incisions, while allowing the curve of the overall pavilion to be constantly changing. We also needed the unique connections to be as invisible as possible to focus the attention on the chairs. After many tests, we settled on threaded rods of unique lengths that were connected by bolts through small incisions (ear-piercings) in the chair.

There are no real advantages to using chairs in terms of construction, of course. The point is to make people think about everyday objects: where do these chairs come from? Where does the material come from? Can it be recycled? How am I doing with my own recycling practices? The thoughts go in two directions: one is towards recycling and ecological footprint, the other is re-thinking about the chair as a beautiful object..the way that the light comes through it, the curve of the back, the friendly spike in the upturned legs...

Many! While the chairs are rated structurally, they are rated only for sitting in the usual position, not having the loads in the directions that we had them. This was very difficult to calculate. We modeled it digitally and made mock ups and compared the results. Since they are outdoor furniture, the chairs are not fire rated and a fire rating was required from the City in order to get building permission.

We looked at a number of different chair types, but ultimately cost and the ubiquity of this chair won out. Someone asked me after a lecture if it would not be better to build this out of a standard material like plywood. They missed the point. It would of course be easier to build with a known material, but the point of the project is that moment of realization, a snap to reality, when the object becomes apparent, and a chain of other thoughts follow. It's not necessarily easy, what we do, but it is not meant to be easy. It is meant to make you think.

We attempted to buy in bulk from the manufacturers, as well as to have the chairs donated. Eventually the best option was buying chairs at a discount from Home Depot. All of the chairs have unique connections (threaded rod) which were modelled in Grasshopper, and installed by our team. Chairs were built in vertical C-shapes inside over the course of a few weeks, then carried out to the site and installed together (36 C-shaped columns) in two days. 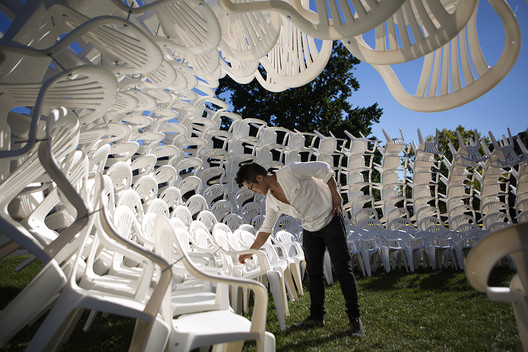