The content of the show—a series of photographs, drawings and paintings homogenized in scale and presented at eye-level throughout the "rooms"—is curated by Fosco Lucarelli and Mariabruna Fabrizi of the Socks Studio "Visual Atlas," a "non-linear journey through distant territories of human imagination."

As part of an expansive discussion held in June 2016 (and published in the Triennale's catalogue) Lee, Geers and Costa reflect on the process of designing, and co-authoring, the installation. For Geers:

From day one it was clear to us that we should work together on the same space and that we would make full scale, "one-to-one" architecture. It was interesting because I believe our offices are part of a generation that is, I would hazard to say, post-diagrammatic from the point of view of our part of the world [Europe], and more formalist from the point of view of Mark and Sharon's [co-founders of Johnston Marklee] part of the world [America].

One the one hand, there are obvious differences between our offices, but, on the other, the process that we participated in together provided coherence to the final outcome. [...] There's something special about building in this "one-to-one" scale. Often exhibitions of architecture consist of representations—whether through a model or a drawing, which is not the thing itself—standing in for something larger and real.

Each of us has his or her own methods, and in the design sequence we build a sort of theory. Being a sequence of decisions and thoughts, the project is always theory until the moment it's built. And when it's built, it becomes something real, with social and physical conditions; it lives and is part of a real city or landscape or wherever it is. When we build, we jettison theory.

You can view the project, here.

Space 1: A Window to the River 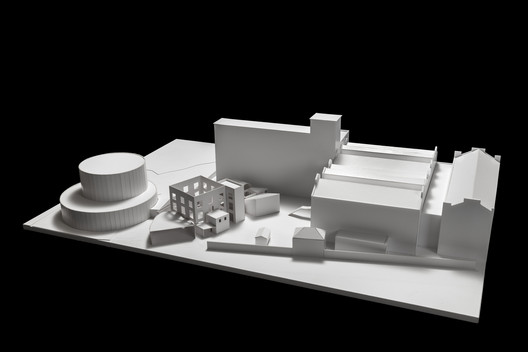