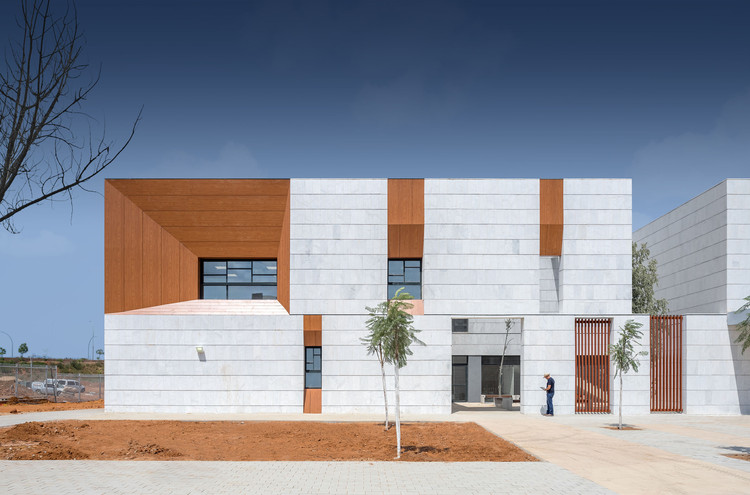 Text description provided by the architects. In accordance to the guidelines given by the Israeli ministry of education (who is financing a substantial part of the building cost of educational facilities in the country) the site was provided by the municipality for this project. It was enough space to contain a primary school, a gymnasium, two basketball courts and exterior areas for the entertainment of the 700 children attending this compound.

The site position plan resembles a "Tetris" game structure. Each part of the whole creates the negative space of the other, making the site organization - simple, straight forward, and coherent.

The entrance to the compound is from the south east corner, through a public square. As one passes the guard booth and enters the compound, the school building is revealed in all of its glory and function as a barrier enclosing the front playground for the youngest students.

The 2 story building, a rectangular elongated shape was designed with two distinguished wings: The Entrance hall and Administration wing, and the classrooms with its appendix wing.

The building designs leading idea was to create a simple homorganic envelope. A simple building but not simplistic, an elongated box, dignified and at the same time humoristic and loose.

Mostly cladded with white stone, the envelope has twists in it -  a plastic, 3 dimensional and staggered fenestrations, resembling the random, chaotic nature of the young students. These fenestrations were cladded with "Fundermax" 8 mm exterior HPL to appear in contrast to the white monolithic walls.

The sun direction in the mornings changes the façade and highlights its 3-dimensional appearance giving the fenestrations impressive depth.

The simplistic structure hides within itself two main exterior spaces that were the seeds of the whole design – the Patios.

Those two patios were designed as "exterior classrooms" for the enjoyment of the young students. The patios are wide and intimate at the same time and are an integral part of the building, accessible from within and from outside. Their harmonious atmosphere and peaceful design makes them attractive for the young users who find them a joyful-shaded-protected play area.

Moreover, the patios location in the structure makes them easy spaces for future growth in the next decade as the neighborhood population grows. They can be closed and built upon adding usable space to the building without harming and damaging the appearance and the integrity of the façade.

Each patio includes seating areas and two poplar trees giving them a peaceful "Zen" feeling. The design is in a way a dialogue with the "Mediterranean court yard" known in these part of the world due to the harsh climate and hot temperatures.

The general design derives its logic from that same courtyard idea so that the building is not a simple closed envelope, rather it's a long folded shape with many exist and exterior spaces enclosed between the building volumes.

As a result, the building is highly ventilated, lit, and shaded simultaneously. The corridors function as transparent hallways -  lighting and reflecting the activities inside and outside, and still being protected from the sun.

According to the program given from The Ministry of Education, the building was designed to have three sections that could have been built in stages without harming the ability to learn during construction.

The design commission also included designing the interior and the furniture. A holistic approach led to the concept of using "quiet-calm" soft bright colors. Finishing materials were chosen to look young and fresh. 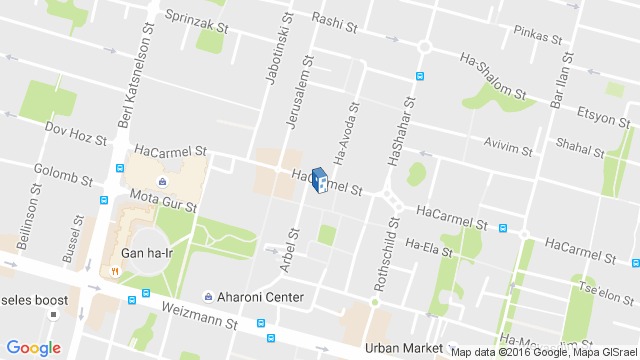 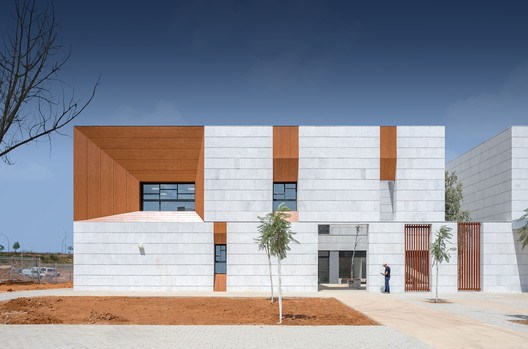