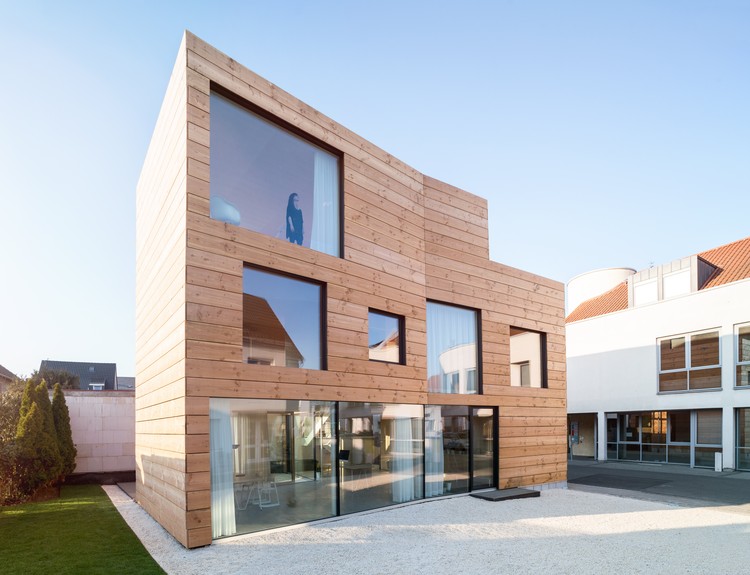 Text description provided by the architects. Bischofsheim is a community of around 12,000 located in a central suburban area between Mainz, Wiesbaden and Frankfurt.

An ecological new solid wood structure (cross-laminated timber manufactured by KLH Austria) with flexible usage was to be built on a small plot with two old garages in a densely built up town centre.

The dream of the client was also to move his office back to where he lived and to nevertheless take advantage of all the urban possibilities of modern, contemporary work (co-working) in a small space and in a small village. In addition, the new structure was expected to offer cost security, also with a view to a potential later sale or a reduction in the size of the office. Sustainability was to be a key consideration in all areas.

The first step was to outline and discuss in detail the complex requirements of the client, as well as to meet the urban development and building code regulations and to make use of their potential.

One requirement was that the new structure be built on the right boundary directly beside the neighbouring building in line with the housing row. To the rear, approval from the neighbours would have been required for the development on the boundaries.

The new structure had to be built directly on the street, while access to the building had to be set back from the road.

The guiding principle for the design was flexibility and spatial relations both inside and out within a small space.

The building itself was to have the appearance of unobtrusive but carefully thought-out modern simplicity and a reduction of materials, allowing a versatile and flexible appearance. A form that is not abstract and that does not fight for attention, but meshes into the urban context.

The building was designed in such a way that public and private rooms were created. The heart of the building with its bookshelves filling a wall across three stories fulfilled building code regulations and provided a direct connection to the neighbouring building.

The building jumps back and creates a private, protected inner courtyard, which opens up the view when entering the building through the transparency of the floor-to-ceiling windows on the ground floor and offers unexpected sight lines.

The ground floor with its open areas, which can be divided with curtains, is used as a common area for meetings, a kitchen and workshops.

The first and second floors, on the other hand, offer the individual open offices a sense of intimacy and focus. The intermediate areas are used as communication areas, with the heart of the building with its communal storage area forming the central link.

From a long-term perspective, the interior with its separate cores is designed in such a way that the house could be easily transformed into a pure or partial residential building at any time.

The deliberately exclusive use of wood as a construction, insulating and aesthetic material both inside and out was intended to meet the guiding principles of sustainability and simplicity. 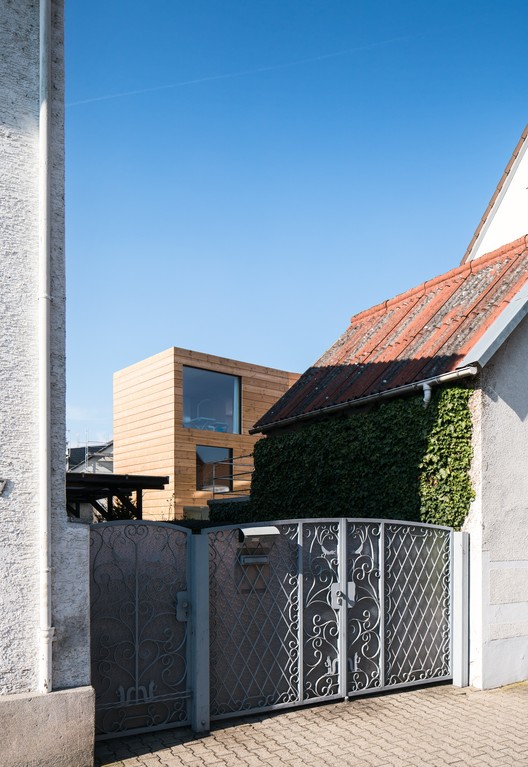 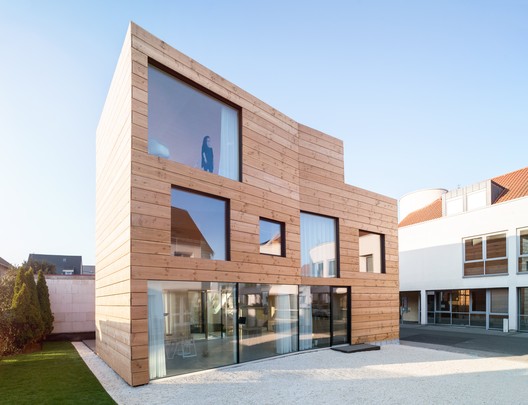