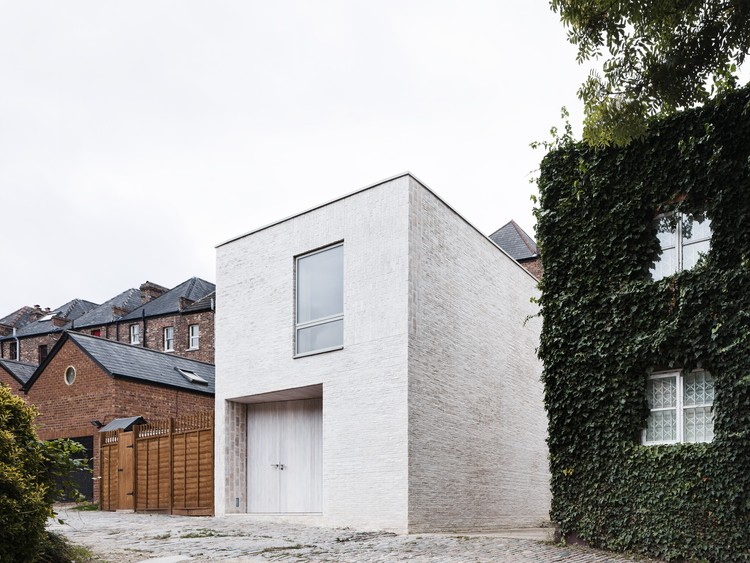 Text description provided by the architects. A 68 square metre compact 2 bedroom mews house and enclosed courtyard of 11 square metres in Highgate. This 2 storey brick house faces onto a quiet cobbled mews. Its 90 square metre site, on land to the rear of a 5 story locally listed building, was formerly occupied by a disused garage and derelict garden. It sits amongst a patchwork of rear fenced off gardens, garages, mews houses and ad-hoc rear ad-ons and a recently completed house, also by Russell Jones.

Originally a decrepit backland area, of run down and disused garages and a haven for crime and fly tipping, the location is now gradually developing into a secluded residential enclave.

The project was designed and developed with an economy of visual, spatial and structural means. The material palette and the design were kept intentionally simple. The volumes were handled in such a way as to make the most of a small site constrained by overlooking neighbours on most elevations, resulting in a building that has an overall sense of space and calm infrequently seen in properties of this size in London. The careful selection and crafted use of materials create an essential quality that isn’t apparent in the materials themselves. The resulting home, although compact, feels spacious and special.

On the ground floor the covered main entrance provides direct access to an open plan living, kitchen and dining area. This area opens out onto a rear courtyard via floor to ceiling glazing which provides a physical and visual continuation of the space. The paving stones form a continuous surface from the front external entrance through the internal areas and out into the rear courtyard. At the point of entry an external bicycle, services and recycling store is provided and, adjacent the door, a full height obscured glazed window. To the rear is a ground floor WC with laundry cupboard. The first floor is accessed via a single flight stair hovering beside the brick wall. On the first floor are 2 bedrooms, each with built-in storage, and a bathroom. Dormer and skylights are carefully positioned to bring daylight in to the interior.

In the courtyard a small niched area is incorporated into the brickwork wall for residents to place candles or herbs and plants to enliven the courtyard place.

The choice of building material for this small Mews House in Highgate was influenced by the original context, and the ongoing development of the mews into a new residential enclave. The prominent gable fronted terrace that faces the A1 carriageway on one side, presents itself to this backland location as a continuous wall of punctuated London Common Brickwork. Discussion with the Haringey Planning department led to a selection of a light coloured brick and mortar for new buildings in the mews, as a contrast to the weathered and dirty commons behind, to unify and instil a sense of continuity to the new developments in the mews, and also to increase light levels along the cobbled passage.

Wienerberger Marziale was initially used in the Mews on another project by Russell Jones and continued as the primary material for the small house. Marziale was selected for all external and internal structural walls, and precast concrete paving stones in a light tone to match the brickwork were used throughout the ground floor interior and exterior.

The quality of the brickwork has been enhanced through the use of a carefully selected mortar, using white cement, lime and washed river sand, and a subtle manipulation of the surface texture using a method known in Scandinavia as ‘Sækkeskuring’; A similar finish, known as ‘bagging’ was popular in Australia in the 1960s and 70s. This surface finish was appreciated as a way of creating a more monolithic Architecture, without losing the identity of each and every brick.

Douglas Fir was used in the first floor rooms and for the entrance joinery. Douglas Fir treads and fir faced structural plywood were used for the stair. To these, white oil was applied as the finish.

The building includes underfloor heating throughout and, built to level 3 Code for Sustainable Homes, makes use of a rainwater harvesting system and photovoltaic panels. 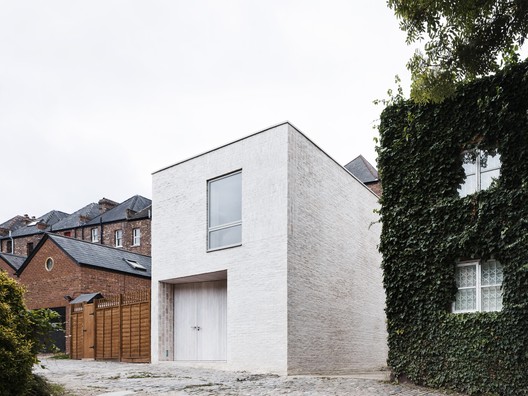