JCJ Architecture and Leong Leong have unveiled their design for the Center for Community and Entrepreneurship, a new mixed-use community building for the non-profit organization, Asian Americans for Equality (AAFE), which will be located in Flushing, Queens, New York. Upon completion, the building will span 90,000 square feet over seven stories at the corner of College Point Boulevard and 39th Avenue.

Inspired by AAFE’s mission to enrich the lives of Asian Americans and others in need throughout New York City, the design is modeled using a progressive building form following the concept of holding hands in interweaving fingers. 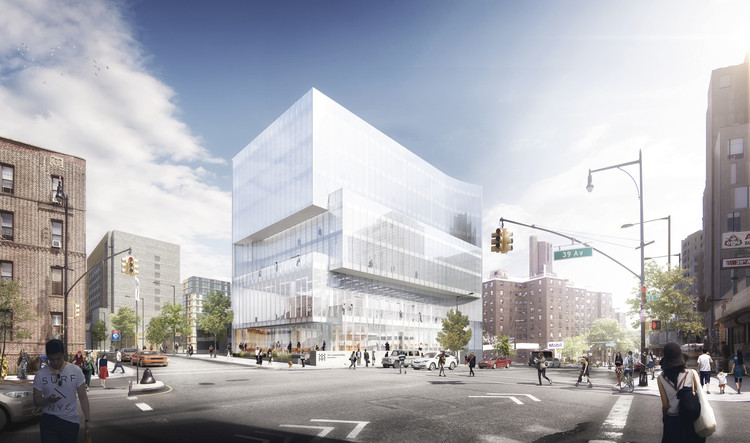 Four interlocking structures with outdoor terraces give the building its form. “This form is articulated by a gradient of vertical transparencies that emphasize its distinct silhouette. The more transparent lower two floors contain the most public programs and support direct engagement with the neighborhood at street level.  As the programs become more private on the upper floors, the exterior becomes more opaque while still internally supporting views of the city and the Flushing Creek waterfront" - described the architects.

"The goal of this project was unique from the start: to create a vertically integrated community for Flushing that seamlessly links work, events, and the public," said Chris Leong, partner at Leong Leong, who serves as the Designer on the project. "The informal spaces of circulation become primary spaces for interaction and exchange – we turned the architectural promenade into an vertical interface that blends public space and work space."

On the ground level, a sweeping outdoor plaza, as an interface to the surrounding neighborhood, will connect a 5,000-square-foot public market to the street.

The second floor of the building will feature flexible community space, while the third floor will house Flushing’s first business incubator, a co-working space for local small businesses and start-ups to collaborate. AAFE’s Flushing program offices will occupy the fourth floor, and floors five through seven will be open for use by established businesses—potentially those from the incubator.

Moreover, a three-story open staircase will serve as a vertical interface between floors, thereby encouraging collaboration. On the ground floor, this staircase will provide seating space for the public market, and on the second and third floors, the staircase can transform into event or performance space.

“JCJ’s core belief is that strong design builds communities, and it is truly inspiring to bring a structure to life that is completely in concert with AAFE’s mission,” said Peter Bachmann, Principal and Institutional Market Leader at JCJ Architecture, which serves as the Executive Architect on the project. “This mission inspired JCJ and Leong Leong to design a progressive building form modeled after the concept of holding hands and interweaving fingers – a physical presence to match the social symbol for community empowerment.”

The Center is expected to complete construction in 2018.