Save
Bijoy Jain's 2016 MPavilion Opens in Melbourne
Share
Or
Copy

The 2016 MPavilion, designed by Indian architect Bijoy Jain of Studio Mumbai, has opened in Melbourne’s Queen Victoria Gardens. Over the next four months, the bamboo structure will play host to a free public program of over 400 talks, workshops, performances and installations.

Bijoy Jain’s design joins the growing international trend of “handmade architecture” as it becomes the largest bamboo structure in Australia, utilizing 7 kilometers of Indian bamboo, 50,000 kilograms of Australian bluestone, 5,000 wooden pins and 26 kilometers of rope to cover a 16.8 square meter area. The slatted roof panels are constructed from sticks of the Karvi plant and were woven together by craftspeople in India over a four month period. 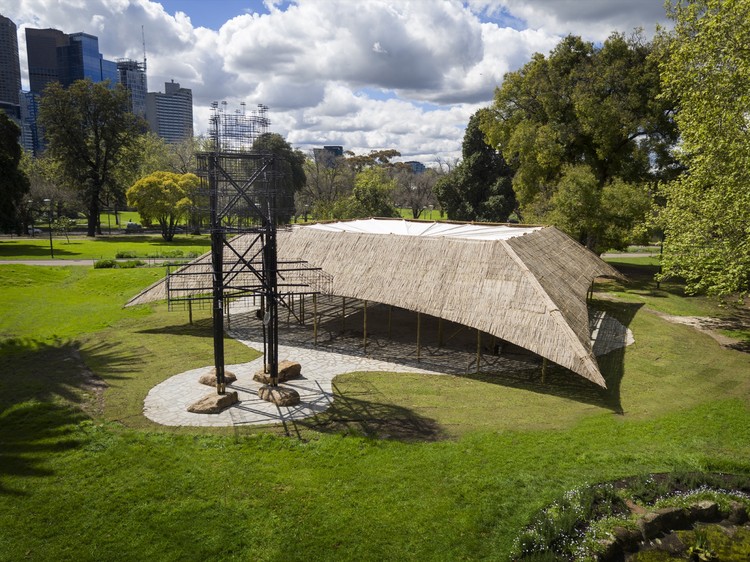 “MPavilion is a space for the people of Melbourne to gather, talk, think and to reflect,” said Bijoy Jain. “My objective has not just been to create a new building, but to capture the spirit of the place by choosing the right materials, respecting the surrounding nature and working collaboratively with local craftspeople to share design and construction ideas.”

An large opening at the center of the roof provides a connection between earth and sky, with a golden well placed below to symbolize the importance of water to place and community. Adjacent to the pavilion, a traditional Indian ‘Tazia’ tower welcomes and directs visitors toward the shelter. At night, the pavilion will feature a lighting design by Ben Cobham of Bluebottle, coordinated with a specially commissioned soundscape by artists Geoff Nees and J David Franzke.

“Bijoy’s handcrafted MPavilion is a calming and thoughtful space which will inspire the people of Melbourne. As a utopian space for the creative industry and community, MPavilion continues to challenge the way we see and engage with the world by encouraging design debate and cultural exchange,” commented Naomi Milgrom AO, Chair of the Naomi Milgrom Foundation and project commissioner.

MPavilion’s 2016 program will include an opening public forum hosted by architect Peter Maddison along with MPavilion creator Naomi Milgrom and architect Bijoy Jain on Thursday October 6 at 6.15pm. The trio will discuss MPavilion 2016’s vision for cultural exchange and the collective construction process. A special exhibition of Jain’s work and design process will also be displayed at the RMIT Gallery from September 9 to October 22.

To learn more about the 2016 MPavilion, check out our post on the design, here. For more about this year's programming, visit the MPavilion website, here.