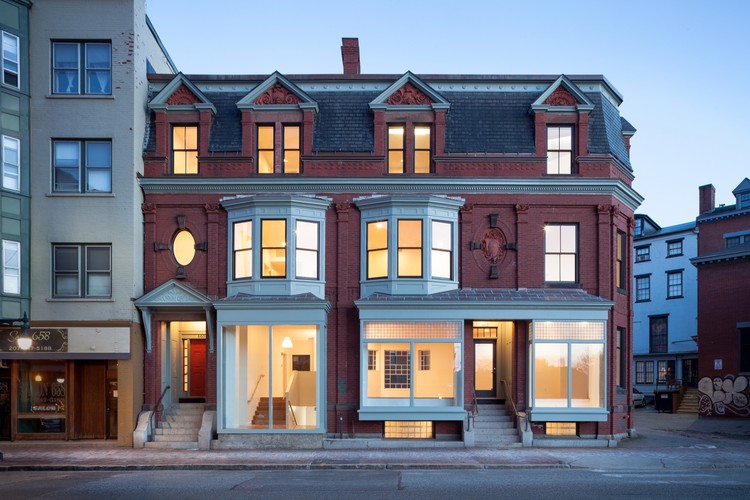 Text description provided by the architects. PRESENT Architecture, a New York City-based architecture practice, is proud to announce the opening of 660 Congress Street, a designated landmark building, which they have transformed into a contemporary residential and retail space that defines the ambitions of an emerging design-minded Portland, Maine. Located at the corner of Congress Street and Longfellow Square, it’s situated in the thriving Portland arts district near the famed art museum, Maine College of Art, acclaimed restaurants, and a short walk to the harbor.

Originally built in 1886, 660 Congress Street had been abandoned for many years when a fire, followed by prolonged water exposure, destroyed its interior. In 2011, under new ownership, it was determined that the compromised structure and deteriorating brickwork required immediate attention and that the building needed a comprehensive rehabilitation.

PRESENT approached the $2M redesign with a vision to revitalize the landmarked facade and modernize the building’s interior, allowing the spaces to flow fluidly together.  The 7,500 square foot structure was completed in 2016, and includes a pair of two-bedroom apartments, and a light filled commercial space on the ground floor with a spacious basement retail space.

The fire presented a clean slate for the architects, and their approach was to create a new design aware of the past, but not bound to it. “After researching local records, we couldn't find any documentation of the interiors. We returned to the historical facade, tracing the silhouette of the mansard roof with gently curving walls. At the third floor ceiling, the expansive volume of the roof is revealed with dramatic coffers that bring light into the spaces through skylights and hidden architectural lighting,” said Andre Guimond, co-founder and partner of PRESENT Architecture.

In other areas, fragments of history were left untouched, like arched doorways, fireplaces, original brickwork, and fire escapes that were converted to balconies for the apartments. The new residential entrance features a blackened steel stair with solid white oak treads, fabricated by a local Maine welder. The thin industrial lines of the steel balusters continue along the stair for three stories, casting shadows from the overhead skylights onto the space’s exposed historic brick. Everywhere, there are high quality materials and building methods that reinforce the ambitions of the renovation. Many of the modern improvements are hidden from view, such as new HVAC and utilities, code compliant structural work, and upgraded environmental and life safety systems.

The front facade on Congress Street features meticulously rehabilitated brickwork and ornamental terracotta, a restored slate mansard roof, and large floor to ceiling storefront display windows that were added in the early 20th century to capture the attention of passing pedestrians and motorists. Noteworthy improvements to the facade include the replacement of the double hung windows, and refurbishment of the leaded glass transoms. New copper roofs were installed, and unsightly downspouts which had been haphazardly attached to the facade over the years, were returned to their original concealed brick pockets. The pressed tin frieze and dentil ornamentation were both carefully restored on site, while the rotted wood storefront window frames were replaced in kind. 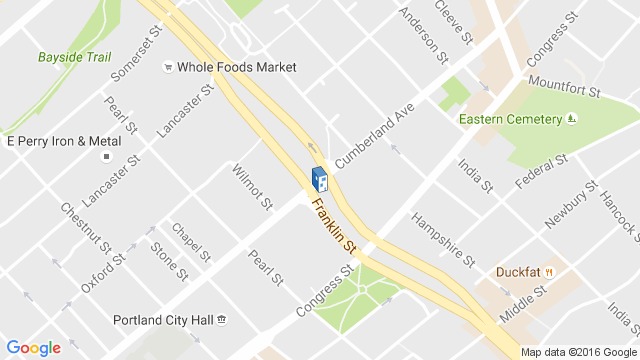