Save
Critical Round-Up: The National Museum of African American History and Culture
Share
Or
Copy 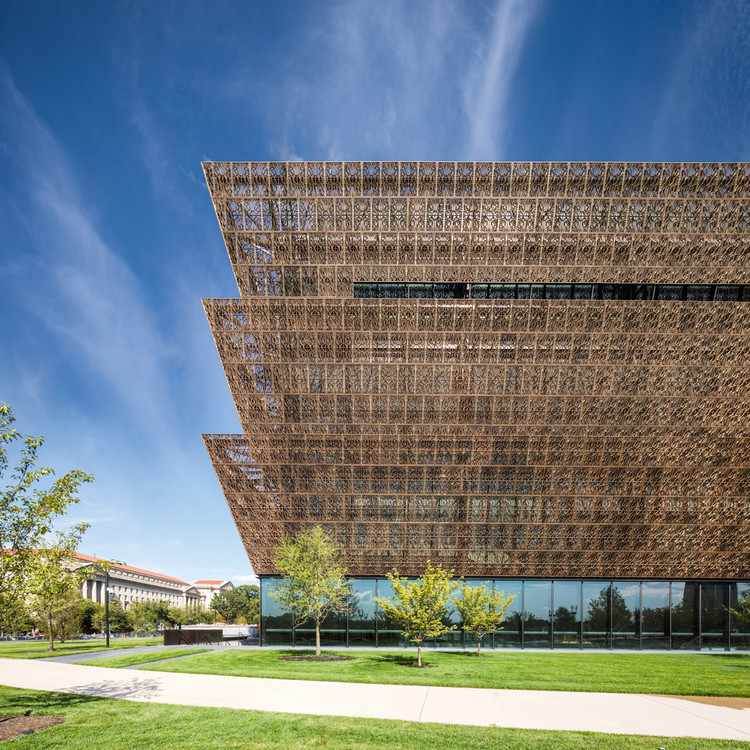 “The most impressive and ambitious public building to go up in Washington in a generation” – Christopher Hawthorne, LA Times

Hawthorne celebrates the building’s architectural character and beauty of the façade’s “shifting personality” in different qualities of light. However his praise for the NMAAHC does not stop at the building's aesthetics. Hawthorne highlights the museum’s bold mission to, on one hand, provide a beautiful design, while on the other uplifting the African American culture on a site dominated by white monuments:

The museum’s skin — has that typically benign architectural term ever been more charged? — allows it to stand apart from the Mall’s white-marble monuments like a rebuke.

Due to the history of the museum, the site and the nation in which it is built, the political and cultural prominence of the NMAAHC is hard to ignore. Hawthorne acknowledges Adjaye’s vision to use this to the building’s full advantage, while at the same time applauding the architects' respect for the museum’s context:

The building itself is perhaps the most powerful display of all, a careful, strategic and sometimes defiant exploration of the relationship between black culture and government prerogative, which is another way of saying it is a piece of architecture supple enough to please the archivist and the activist alike.

Half of the building has been “buried” underground, as a result of Washington’s height regulations. Not only does this produce a neat design above-ground, but also helps to communicate the progression of African American history:

The NMAAHC is undeniably an imposing architectural object, monumental and temple-like. Yet it also suggests something that has been unearthed, a box pulled from the ground and dusted off; much of its 420,000 square feet of interior space is buried below street level.

“Although credited as lead designer, Adjaye is one of four architecture practices responsible for the project, a cocktail of divided responsibilities that feels like too many cooks.” – Oliver Wainwright, The Guardian

Wainwright is the only critic to point out the difficulties that can arise from having many voices involved in the design process. Clearly, he attributes some of the museum’s limitations to these circumstances, providing an explanation for some critics, who have been disappointed by the comparison of the building with original visualizations:

The whole project, then, was co-ordinated in the cloud, using BIM modelling software, and there are moments where you sense the left hand might not have quite understood the right hand’s intentions, areas that appear to have slipped through the contractual cracks.

Although Wainwright, like Hawthorne, pays tribute to the museum’s success in holding its own on such a sensitive site, he goes on to comment on what he sees as several architectural shortcomings of the NMAAHC. These include the bronze coated aluminum façade, initially intended to be fully cast in bronze, as well as the intention to have much larger surfaces of the perforated metal, which have instead been replaced by smaller repeated elements:

These choices don’t ruin the effect, but they lend the building a slight cheapness – a feeling that gets more pronounced when you step inside.

Some of these drawbacks resulted from lack of funding, as well as structural difficulties. Wainwright recalls the architects’ original design proposals, expressing a clear disappointment in the materialized result:

The circulation areas, housed in the gap between the outer facade and the gallery levels within, promised to be a dramatic sequence up escalators and along cantilevered landings, veiled by the lacy mesh. The result feels half-baked. From the inside, the cumbersome steel structure needed to hold up the facade takes up most of the view, while the impact of specially framed vistas to nearby monuments is lessened by clunky fixings.

However, on the whole Wainwright concludes that the building, while not perfect, works adequately in its setting:

Despite some clunks, the result has a compelling, spiky otherness, standing on the Mall as a welcome rebuke to the world of white marble monuments to dead white men.

“As a freestanding largely symmetrical object, the new museum has something in common with its neighbors, but as a dark-clad structure that eschews classical columns for apparently floating horizontal layers, it does not.” – Rowan Moore, The Guardian

None of the critics can avoid discussing the building’s intricate relation to its site, and Moore is no exception. His review of the NMAAHC is very much in line with that of Wainwright’s, remarking on the dissonance between the original renderings and the aluminium reality:

It is not flawless, as it sometimes feels assembled or panellized more than crafted. The bronze-colored screens are not the delicate, seamless things suggested in computer visualizations. The build-up of the exterior cladding – glass wall plus screen plus substantial fixings for the latter – impedes the sense of connection between inside and out.

Despite this, Moore focuses on the building’s conceptual vision and achievements. In accordance with the other critics, he emphasizes the building’s strength that lies in its complexity. Due to the intricate nature of the NMAAHC, certain imperfections can be hard to avoid, but on the whole the architectural novelty hits the mark:

There are moments of gawkiness that can be engaging or uncomfortable, depending on your taste. But it achieves its main, difficult task, which is to be both American and African American, and to be of its location but also different from it.

“Architecture and identity rarely fuse as convincingly as they do here.” – Justin Davidson, NY Mag

Davidson, like many of the other critics, comments on the division between the museum above and below ground, going into more detail about its successful role in serving the African-American story the museum wants to tell:

Visitors enter a broad, open lobby that serves as the museum’s midpoint, both overture and interlude between the historical journey below and the celebratory galleries above.

However in contrast to his fellow critics, Davidson seems to take no issue with the compromised bronze structure, strongly endorsing the aluminum façade which he calls “the most seductive aspect” of the building’s design:

Its dark bronzed skin broods in the glare of morning, glows in the late afternoon sun, and at all times contrasts with the marble-white uniformity of Washington’s official architecture. You could hardly ask for a more literal, or more effective, architectural assertion of a building’s mission.

The bronzed panelled canopy is an extrapolation of railing designs wrought by slaves, reflected and rotated to create a pattern covering the building. Davidson notes not only the beauty and practicality of the structure, but also its symbolic relevance that seems to orbit the not yet opened, yet already historic, monument:

Standing on an indoor balcony, we look out at the capital campus through a clarifying scrim. Adjaye has reframed the nation’s preeminent icon as an object behind glass — an ambiguous symbol best comprehended in the context of black America’s story.