All the world’s a stage – quite literally so, in the case of the Container Globe, a proposal to reconstruct a version of Shakespeare’s famous Globe Theatre with shipping containers. Staying true to the design of the original Globe Theatre in London, the Container Globe sees repurposed containers come together in a familiar form, but in steel rather than wood. Founder Angus Vail hopes this change in building component will give the Container Globe both a "punk rock" element and international mobility, making it as mobile as the shipping containers that make up its structure. 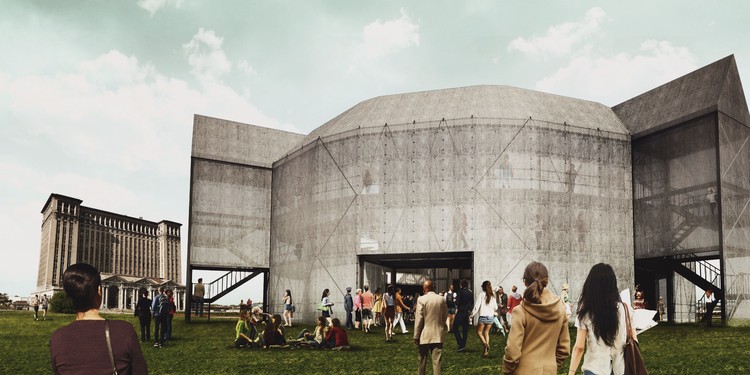 The project has been spearheaded by Vail, with Nicholas Leahy of Perkins Eastman acting as the project’s lead architect and Michael Ludvik as structural engineer. The two have previously worked together on the TKTS Booth in Times Square, and Leahy also has previous experience working on the London Globe in the 1980s. Additionally, the Container Globe team has enlisted the New York branch of Arup for the theater’s environmental performance studies.

The assembly of the Container Globe is kept logically simple, as seen in an animated video released by the team. The bulk of the theater is made up of the shipping containers forming the seating gallery, which are all modified in the same way and stacked into a tower of three such modules. Interestingly, while steel sheets are not usually the material of choice for performance spaces, the design team found that the containers’ corrugation, and its effect on acoustic reflection, actually lends itself well to housing live performances. The rest of the shipping containers are also cut through and added to, forming the backstage and balconies, with stairwells connecting the separate areas. The entire structure is then draped with a “tough industrial mesh,” providing shelter from wind and rain while also letting in daylight. The mesh will also help soften the sound of rain for those inside the theater.

Though currently unbuilt, plans are underway for the first Container Globe to be constructed in Detroit, where it would be used for performances of not just the Shakespearean persuasion, but also for live music, dance, and in winter as a sculpture garden. After this, Vail hopes to reproduce the Globe in other places around the world, anywhere the team can gain access to the shipping containers required--“ie everywhere,” as Vail puts it. In particular, Vail is interested in mobilizing the Globe to communities lacking in cultural infrastructure in order to increase accessibility to the arts.

The theatre is clearly a labour of love for Vail, who accredits the Sex Pistols and King Lear as equally formative influences in a TEDx Talk on the project. Having funded the project himself thus far, a Kickstarter will be launched in 2017 to help reach the project’s estimated cost of $6 million. It is an ambitious number to reach, in tune with the ambitious nature of the project itself.

In the hopes of connecting people and performance, the Container Globe also connects several creative tropes--Kickstarter, shipping containers and pop-ups, making it easy to dismiss as another passing trend. With the air of an eccentric uncle invested deeply in a hobby, Vail’s own passion makes one want to believe in his vision, regardless of whether or not one actually does. However, with its solid design backing and support from the London Globe, the Detroit community and across social media, the path towards a place to “party like it’s 1599” is set to continue.