One of the most public and politically relevant debates about spatial borders, that of the United States and Mexico, has been probed in a project currently being exhibited at the London Design Biennale. Helmed by Fernando Romero and his team at fr*ee, "Border City" puts forward the idea of a binational city on the border, a place where cultures "both clash and blend to create something altogether unique."

The states along the border of these two countries now have a population of over 100 million people - ample to facilitate the introduction of a new city. fr*ee explained: "Border City is the first integrated masterplan for a binational city conducive to both sides of the border, employing tools of enterprise such as special economic zones to argue for its viability." The masterplan is unrolled in detail at the London Design Biennale, as seen in the video below. The exhibition is open from the 7 – 27 September.

The proposition stemmed from contemporary discussions around issues of immigration, border control, and free trade, and the inflammatory ways in which people sensationalize the problems without looking for viable solutions. The concept is rooted in the long history of places where frontiers meet, places like Hong Kong, Andorra, Baarle Hertog/Baarle Nassau, and Stanstead/ Derby Line.

fr*ee explained in a press release: Economic, social, cultural and environmental sustainability are urban assets and organizing principles for the proposal’s design. Challenging “border situations” are likely to multiply across the world as populations grow, migration increases, and economies continue to globalize. Romero introduces an urban prototype, with a hexagonal plan, that might offer a new model for a rapidly developing world.

The first proposed city is situated on the cusp of New Mexico, Texas and Chihuahua. The research and ideas put into the concept design would be transferable to other binational cities, but in order to give physical form to these concepts, a specific city had to envisaged.

This junction of states was seen as a highly fruitful area due to the completion of the new inland port of Santa Teresa, the I-10 highway connecting east and west coasts, and the 7 existing border crossings in the area. Each of these represent an extraordinary opportunity for logistics and transportation of products in the area, and combine to form the critical infrastructure needed for a plan such as this.

For more information, head over to the fr*ee website, and check out the video of Border City at the London Design Biennale below. 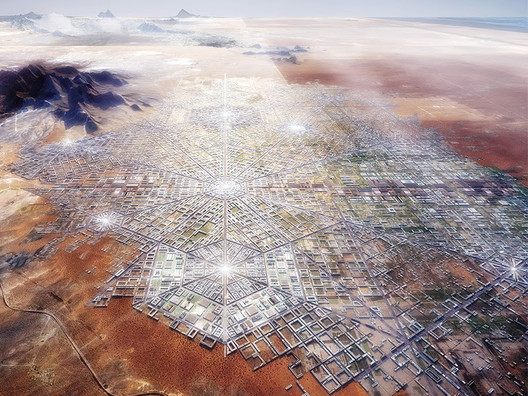