Cross-continental architecture practice KOSMOS Architects have revealed the full design intent for their HelloWood 2016 installation. The wooden structure, dubbed "Thread," subverts the conventional notion of the wall as a divider of space, reinventing it as a new zone of inclusivism and human engagement. Their entire design and construction process was guided by Maslow's hierarchy of human needs, leading to a structure that brings people together and fulfills them in different ways, level by level. 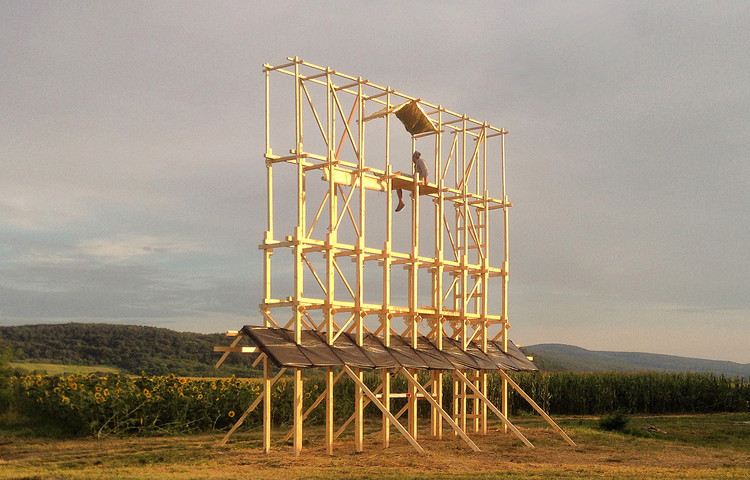 The KOSMOS office is unconventionally structured, with partners in Moscow, New York, and Switzerland collaborating online with students based across the world. Their exploration of the concept of unity is particularly pertinent, as the installation drew members of their practice together for a week to construct Thread in the fields of Hungary, where the HelloWood project village was based.

Alongside the exercise in conceptual and interpersonal engagement, the project also gave the team an important testing ground to practice their construction knowledge. Together, they undertook experiments with wooden joints and cheap infill materials and raised critical structural and tectonic questions.

In the world of communication and global exchange of cultures, walls should unite people and not divide them. As such this project is a wall but a new kind of wall - it attracts rather than separates. It questions physical borders and proposes transforming the typology of a wall from a space-divider into a functional infrastructural space itself which can provide shelter as well as provide for communal, commercial and cultural activities.The structure is built in layers according to Maslow’s hierarchy of needs. The ground floor provides shelter for basic human necessities such as sleeping and the top floor offers space for spiritual necessities such as the need for self-expression. The team built one layer per day, each marked by a ritual of one activity: from sleeping and eating on first days to love and self-actualization on the last days.

For a comprehensive understanding of the depth and variety of KOSMOS's work, check out their online portfolio and follow their Facebook page for updates.

You can see the full spread of projects at the HelloWood festival in our recent round-up. 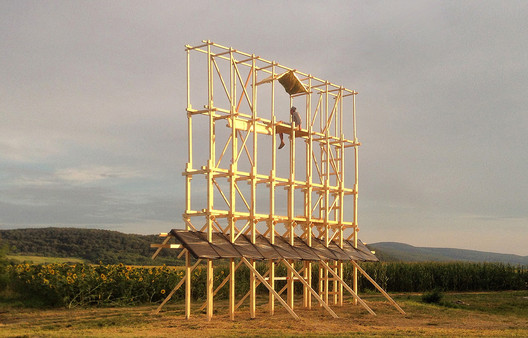