Within the Buenos Aires neighborhood of Palermo in a park designed by the French landscape architect Charles Thays, the Parque 3 de Febrero (February 3rd Park) , sits the Galileo Galilei Planetarium. Inaugurated on December 20, 1966, it was born of the idea of human evolution and the need to show it in architecture. The building exists as an instrument or bridge between the scientific world and the citizens of the city of Buenos Aires.

Designed by Argentine architect Enrique Jan, the building establishes a relationship between astronomy and architecture through its shared components: mathematics and geometry. Thanks to its location and unique shape, it is currently one of the iconic images of the city and the scene of many scientific, cultural, and festive events.

The profile of the planetarium stands out because of Jan’s contribution, both in the development of Argentine industry and as the manifestation of its possibilities, by putting forth a symbol for architectural expression. According to the architect, "This building is one of the few in the world designed and constructed based on the module of an equilateral triangle", the first flat surface that can be created with a minimum of equal sides and enclosing a symbolic principle of unity of origin that establishes a recurring theme in the project. This unit can be seen in the ground plan and is present in all parts of the building, demonstrating the relationship between the parts and the whole.

The construction of Galileo Galilei Planetarium began in 1962, under the Argentinian architect’s direction and through the Department of Architecture of the then Municipality of the City of Buenos Aires. The company Construcciones Civiles SA was in charge of construction and, with great technical effort and professional collaboration, the first function was held in June 1967 and the opening of the planetarium took place on April 5, 1968.

The building has five floors and six staircases, forming three main parts; the front grounds, the exhibition area on the first floor and the circular planetary room, 20-meter-wide space made up of a series of three hemispherical domes.

The front grounds consist of a bridge over a water mirror 47 meters in diameter where you can find ammonites, marine fossils and a metallic meteorite found in Chaco Province in 1965. The entrance hall leads to a spiral staircase that takes you up to the first floor, and the triangular shaped exhibition area, or down to the basement level, where you would find a specialized library, administrative and management room, restrooms, storage rooms and the machine room.

Until 2011 the main room was home to the 5 meters tall and 2.5-ton instrument that made up the system for projecting onto the first inner dome which was covered with aluminum sheets as a screen and provided various functions in relation to the astronomical theme.

After 2011 the space has undergone some renovations. Inside the dome projection, equipment and armchairs were replaced with newer models and the dome’s aluminum plates were also updated. Outside, the dome’s 15-year-old Xenon arc lamp architectural lighting system was replaced by LED lamps, resulting in the current geometric profile that stands out in the Buenos Aires night. 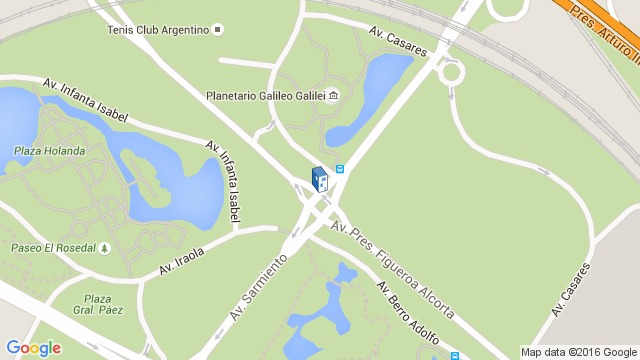 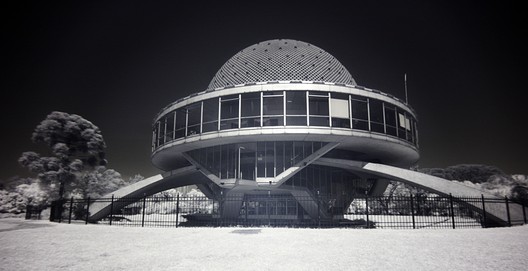