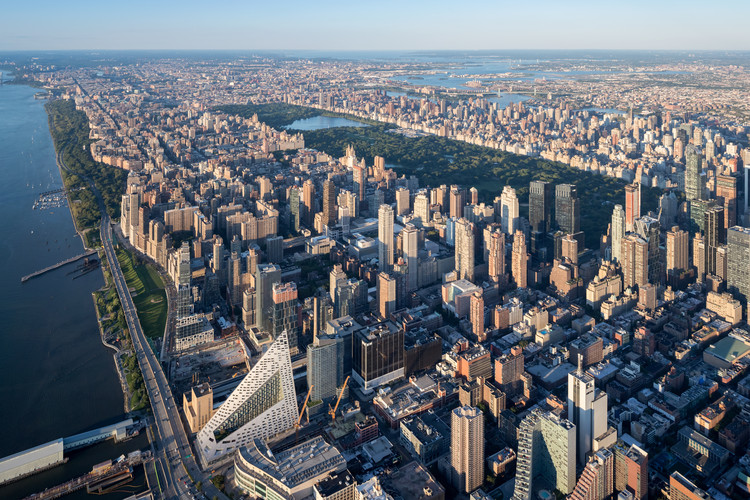 Text description provided by the architects. VIΛ 57 West, designed by BIG-Bjarke Ingels Group for the Durst Organization, introduces a new typology to New York City: the Courtscraper. The 830 000 sq ft highrise combines the density of the American skyscraper with the communal space of the European courtyard, offering 709 residential units with a lush 22 000 sq ft garden at the heart of the building.

VIΛ occupies nearly a full city block at the corner of West 57th Street and the West Side Highway, with uninterrupted views towards the Hudson River Park and the waterfront. The Durst Organization commissioned BIG to design a building for the site in the spring of 2010, and construction commenced in 2011. The 32-story building has welcomed residents since May 2016 with the construction completing this Fall. Earlier this year, the Council on Tall Buildings and Urban Habitat (CTBUH) named VIΛ the Best Tall Building in the Americas as part of its 2016 Tall Buildings Award.

“We are very excited about the building, and the activity has exceeded our expectations in terms of velocity and the rents. We always were thrilled with the building but even more so now.” Douglas Durst, The Durst Organization

The VIΛ Courtscraper is a hybrid between the European perimeter block and the traditional American highrise. The building peaks at 450 feet at its north-east corner, thereby maximizing the number of apartments and graciously preserving the adjacent Helena Tower's views of the river. VIΛ's volume changes depending on the viewer's vantage point. From the west, it is a hyperbolic paraboloid or a warped pyramid. From the east, the Courtscraper appears to be a slender spire.

The shared green space at the heart of the block is derived from the classic Copenhagen 'urban oasis'. The courtyard has the exact same proportions as Olmsted's park, just 13,000 times smaller – a bonsai Central Park. In a similar accumulation of natural landscapes, the courtyard transforms from a shaded forest in the east, to a sunny meadow in the west. Designed by landscape architecture firm Starr Whitehouse, it features 80 newly planted trees and lawns, and 47 species of native plant material.

“In recent decades, some of the most interesting urban developments have come in the form of nature and public space, reinserting themselves back into the postindustrial pockets, freeing up around the city; the pedestrianization of Broadway & Times Square; the bicycle lanes, the High Line and the industrial piers turning into parks. Located at the northern tip of the Hudson River Park, VIΛ continues this process of greenification allowing open space to invade the urban fabric of the Manhattan city grid. In an unlikely fusion of what seems to be two mutually exclusive typologies – the courtyard and the skyscraper, the Courtscraper is the most recent addition to the Manhattan skyline.” Bjarke Ingels, Founding Partner, BIG.

By keeping three corners of the block low and lifting the north-east portion of the building, the courtyard opens views towards the Hudson River and brings the low western sun deep into the block. While the courtyard is a private space and a sanctuary for residents, it can still be seen from the outside, creating a visual connection to the greenery of the Hudson River Park.

The building is predominantly residential units of different sizes with cultural and commercial program at the street level and the second floor. The lower levels of VIΛ have a strong relationship to the courtyard. The lobby is connected directly to the courtyard via a grand stair which invites residents into the courtyard space. The generous amenities at VIΛ include lounges and events spaces, a golf simulator, movie screening room, a pool, a basketball court, gym and exercise studios, and game rooms for poker, ping pong, billiards and shuffle board, and are all constructed around the courtyard to create a strong physical and visual connection between the interior and exterior communal spaces.

At the upper levels, the apartments are organized on a fishbone layout, orienting the homes towards the view of the water. Large terraces are carved into the warped façade to maximize views and light into the apartments, while ensuring privacy between the residents.

The material concept for the interior design of the project is "Scandimerican", another layer of the European-American hybridity. They blend classic modern Scandinavian material sensibility blended with local New York materials. The primary materials of the apartments are oak wood floors and cabinets, and white porcelain tiles in the bathrooms.

As an ultimate union of Scandimerican design, the event spaces feature the Via57 chair, designed in collaboration with BIG and KiBiSi for Danish heritage brand, Republic of Fritz Hansen. The design translates the distinct tetrahedronal shape of the building into a multi-functional piece of furniture, bringing a piece of the Manhattan skyline into shared spaces for VIΛ residents.

The building also features a complementing eight-story sculpture by Stephen Glassman entitled “Flows Two Ways,” anchored on the façade of the adjacent Helena tower. Once completed, the ground floor commercial space will host such public amenities as a restaurant from the Livanos Restaurant Group, a Landmark Theatres movie cinema and the first U.S. retail store for the American Kennel Club. 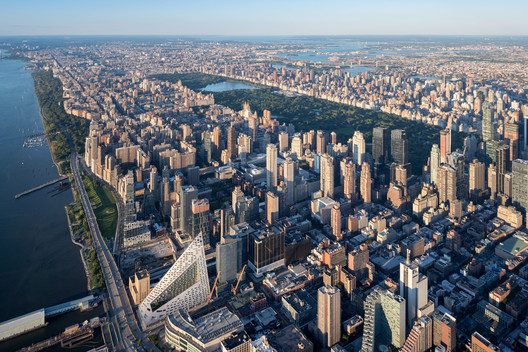