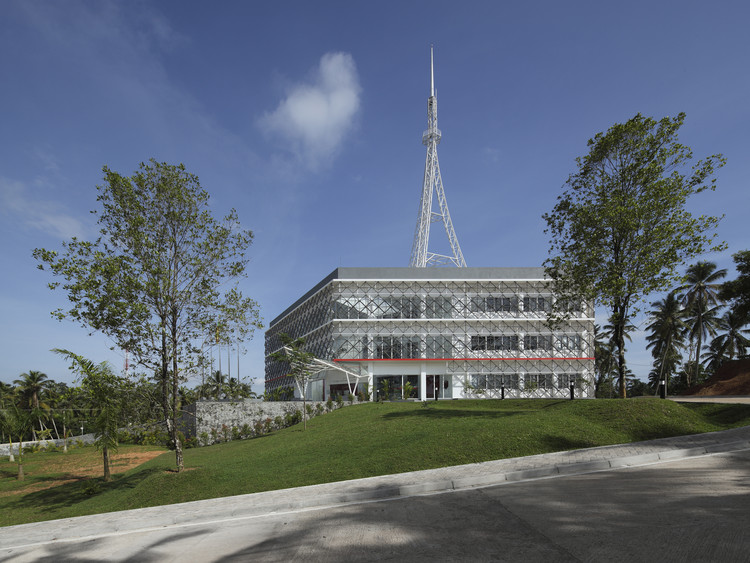 Text description provided by the architects. The SLINTEC, Nanotechnology park is one of the pioneering visions of the greater ‘knowledge hub’ development plan for Homagama creating a unique opportunity to house research incubation and technology commercialization in one setup that functions to both the public and private sectors. SLINTEC is one of the most successful implementations of a private-public partnership in aspects of funding, management and operations that lead to a challenging framework that generated a unique architectural solution in design of spatial and functional requirements. The building is a catalyst for scientific research putting Sri Lanka on the map for science and technology with the state of the art facility being the signature trademark for the nanotechnology park that is to proceed in the future masterplan.

The iconic appearance of the Sri Lanka Institute of Nanotechnology creates the epicenter of the park and features the bold statement of advance technology integrated with sustainable thinking. SLINTEC’s architecture that gives it a corporate identity resonates throughout the research and the commercialization which was much needed for the earlier basement housed research facility that needed to expand alongside its rapid technological development.

The hexagonal plan profile encloses a quadrangular atrium that is covered by a pyramidal skylight & opens up a triangular courtyard that generates a skeletal curved three membered tower converging to a singular point pinnacle spire depicting the play of polygons and shapes inspired by Carbon’s molecular structures that is observed at nanoscopic levels.  Elements of all scales and sizes within the architectural language have been used in order to depict the relationship with nanotechnology as well as geometries that are closely involved in the sciences; this establishes the weight and depth of the research that is happening within the facilities. All incubation areas of the center capture the tranquil and freely accessible natural environment so as to create a free mindset that will enable uninterrupted idea flow to its researchers. The laboratories and research areas are controlled environments yet linked with the exterior natural environment hence visually creating the required spatial feeling.

The center is composed of five levels. The ground floor comprises of public areas and the financing and incubation areas. A Basement houses a one of a kind vibration-proof underground laboratory for housing ultra-sensitive electronic microscopes. Offices for scientists and management is located on the first floor while the second floor takes you through laboratory facilities and further areas for research. Finally a roof terrace level acts as the podium for services and a solar array topped with the 3 pronged iconic tower. The large Atrium dominates the design being a source of light and ventilation that acts as a link both physically and visually to all levels of the building.

Being the only Platinum certified LEEDS Research Center in South Asia, the SLINTEC Building’s sustainable design through fundamental passive and active strategies minimizes demand and maximizes efficiency of all building service resources.

Strategies such as lush green landscaping, courtyards, creation of natural ventilation through drafts and stack effect, use of evaporative cooling, shading devices, Rainwater harvesting, Green rated fixtures, Alternative Energy source of a 102 kW Solar Array were all initially designed around as key principal requirements to achieve the highest sustainability.

The external skin of the building is a modular shading device to minimize solar exposure and gain, thereby reducing the energy demand of the internal air-conditions that is compulsory for the scientific instrumentation. Climatic models suggest a drop of 1 to 2 degrees in temperature with the skin and thermal coating for exposed glass.

The iconic skeletal tower acts as a ranged lightning conductor protecting the entire nanotechnology park. This was a critical solution due to the expensive equipment and the fact that the area is prone to high lightning strikes. It doubles up as a telecommunication relay tower generating income to the facility

The choice of materials reflects on the modern and hi-tech architectural styles and contributes to making the center stand out as a sleek and refined facility. The use of glass and aluminum break the monotony of the concrete structure and add aesthetic appeal to the building while also improving functionality.

The Nanotechnology Center of Excellence is an ideal example of a building that challenges conventional Sri Lanka institutional architecture. It is a step into the future while setting a firm foot in the present. 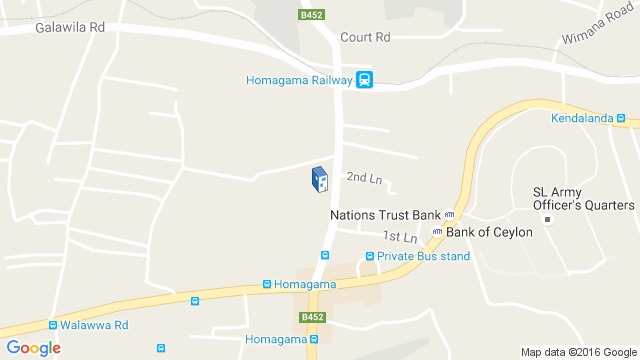 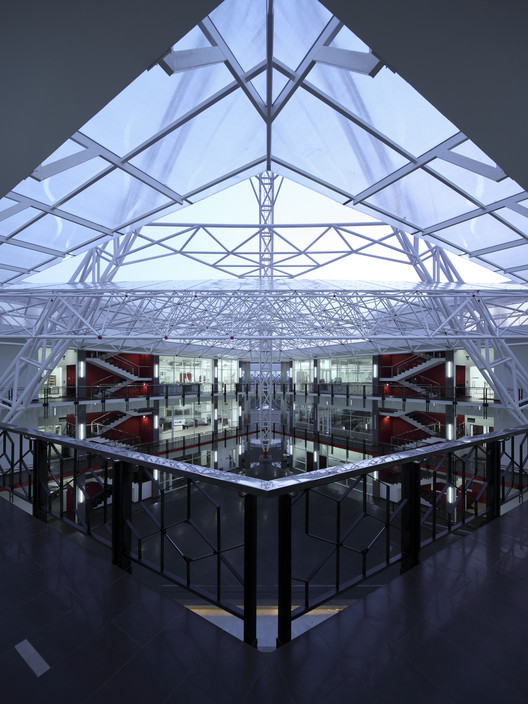