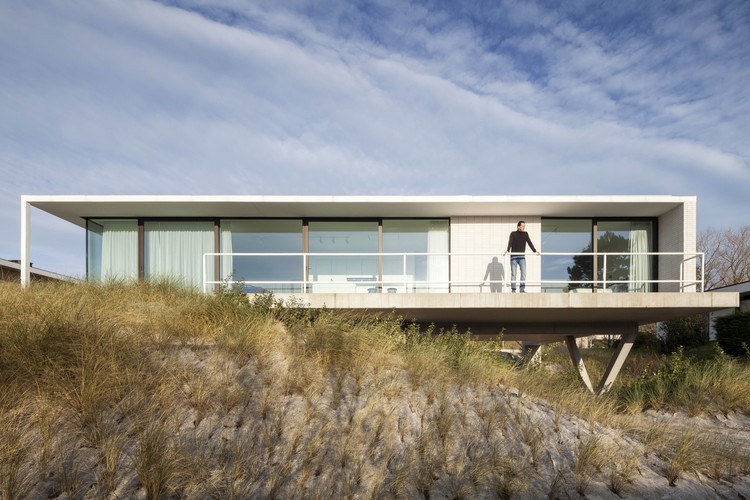 Text description provided by the architects. The house is situated in a residential allotment with “bungalow” houses from the early sixties, surrounded by dunes, not far from the Belgian seaside. To bring the house into accordance with the surrounding houses and the enviroment and to answer to the building regulations, the design of the house was inspired by the bungalow typology. At first glance it looks like a single storey house.

Next to the strict building regulations the residents had very specific demands; they wanted to live on the same level as the street, but they did not want passersby to be able to look inside. On the other hand they also wanted the possibility of inviting people, giving them all comfort, without loosing their own privacy.

The concept of the residence starts from a horizontal concrete plateau that cantilevers against a concrete conical wall. Underground, on the other side of the wall, two hidden rooms with patios provide a counterweight to the horizontal plateau. This conceptual approach answers the specific and seemingly contradictory demands. The bungalow is situated on the new concrete plateau hidden behind the concrete wall. It is carried by the platform, and can thus extend beyond that of the neighbors. It has a completely open view over the allotment behind the house and seems to release itself from the latter.

The original site slopes down a full level compared to the rear of the garden.The platform, a table/land, allows the surrounding terrain to remain naturally rough (another building restriction). The main living areas seem to float over the landscape. On the other side, they are embedded in the gardenscape and connected to the street level.

The plateau covers a carport situated on the lower basement level. The ramp with concrete staircase next to the slope leads to the entrance of 2 studios and the carport. For reasons of privacy, the studios with bathroom and kitchen are situated in front of the conical wall. A cutout in the horizontal surface has been made for these rooms that each have a courtyard providing air and light. This way, both studios can have big windows while preserving a sense of privacy and intimacy.

The positioning of the bungalow on the plateau creates large terraces for the residence (in the back as well as in the front) which can be used as an evening streetside terrace. The terrace is shielded by the conical wall, which is provided with a composition of cutouts devised to provide the residence with ample light, optimal view and elegant passage. This wall ensures the privacy of the residents while guaranteeing well-choosen views towards the street and the dunes. 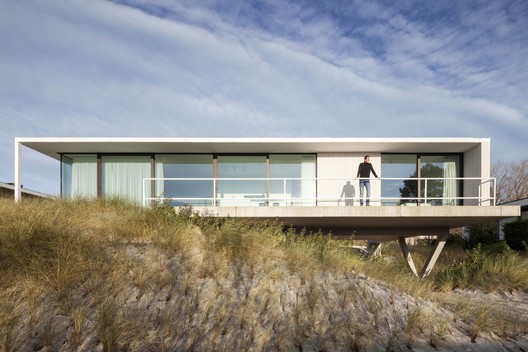