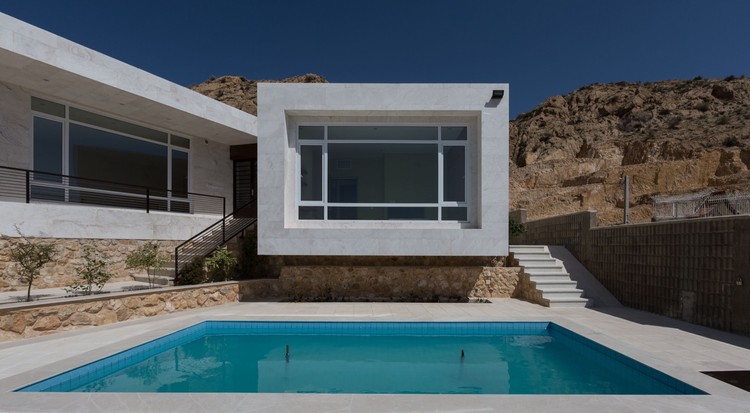 Text description provided by the architects. Designing of a 2000 m2 Villa is one of the project which was firstly offered and finally implemented by our architecture studio in 2014. The villa is located in SadraCity (near Shiraz). The client had two adjacent 1000 m2 lands and wanted to construct a small villa by limited budget for his leisure time at weekends.

After sightseeing, strengths and weaknesses of the region drew our attention. Locating on the hillside and having an overview of villas and gardens are the main features of the site. In contrast, the steep slope in both longitudinal and transect directions was controversial issue which should have been considered. Also, to hinder the sightseeing from adjacent mountain a solution should have been taken to account.

Despite urban legislation to construct two stories villa (since building’s height directly connected to the climbers sightseeing); after a long negotiation with municipality, we decided to design the villa in two separated masses for private and public zone in a same floor, to solve transverse slope of the region’s topography. Furthermore, assessment of mountainous public spaces, resulted in locating the masses in a way that outdoor spaces have the least view to the public spaces of the mountain. Finally, those two masses were located on the floor based on the topography slope. After stabilizing of the main volumes and approximated preliminary plan formation, the exterior faces of the building were assessed. To get widest view of plain in one shot, the public part of the building rotated to some extent. Also, due to the spectacular view to the mountain, several windows located at the back side of the building.

The inseparable part of the designing during the whole designing procedure was to use large windows to provide the building with the most of daylight during the day time and having a wide view to the plain.

In landscaping, designing has been conducted based on the minimum amount of excavation and embankment. Also, minimum damage to the natural features of landscape has been considered by following topographical lines.

Moreover, using abandoned stones from constructional activities of municipality in constructing the façade of the villa, helped to create organic nature and make it more economical.

The white of the villa allows it to stick out as a man-made object on the landscape during the changing colours of the season.

Based on the consultant civil engineer opinion, concrete structure was considered for the building.

According to the mild climate of the region, it is heated by radiators, packages and fireplace and is cooled by evaporative coolers.

Finally, the construction of the project was started in February 2015 and it was completed in March 2016. 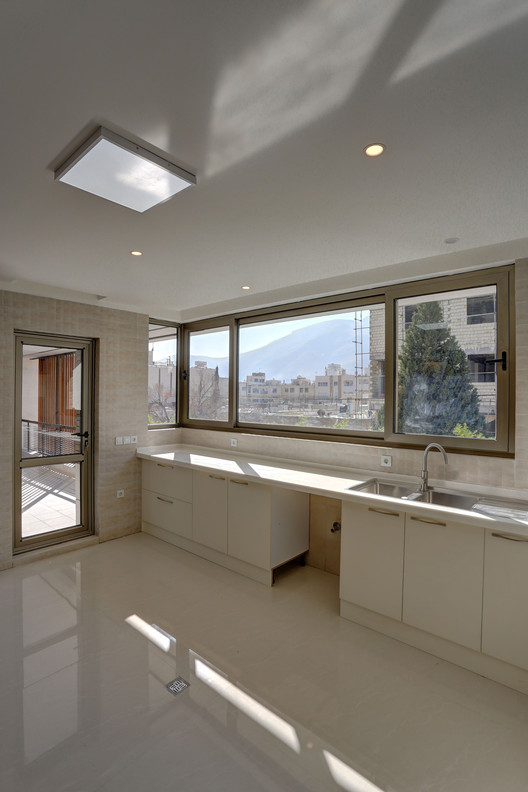 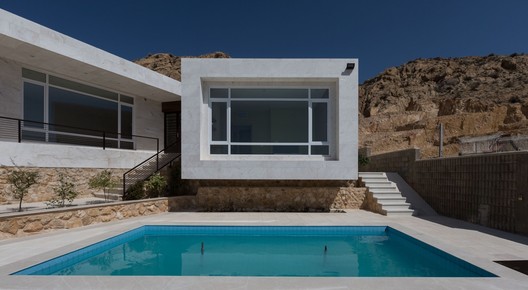