Save
Playhouses For Charity: How One Architect's Design Competition Raises Money For Neglected Children
Share
Or
Copy

Have you ever thought of designing a house that is 8-foot cubed? It's unlikely, unless you've been involved in Dallas CASA’s event “Parade of Playhouses.” For 25 years, the association has asked architects, designers and builders to conceive, construct, and donate playhouses to raise funds for abused and neglected children. Each year, the playhouses are displayed in Northpark Mall – Dallas’ main “cultural centre” – where people can buy $5 raffle tickets to win one of the playhouses exhibited.

Architect Bob Borson conceived his first two playhouses for Dallas CASA in 2009, before starting his popular blog Life of an Architect and subsequently launching “The Life of An Architect Design Competition.” The idea came in 2010 when a great number of architects suffered from the economic crisis. As Borson explains: “I could have a playhouse design competition open to other architects so that they could remain connected to the architectural profession.” This also required Borson to raise money and find builders to construct the designs. “I have always covered all the expenses so that the competition would remain free to enter – the playhouses were for charity and it seemed like the right thing to do,” reflected Borson. 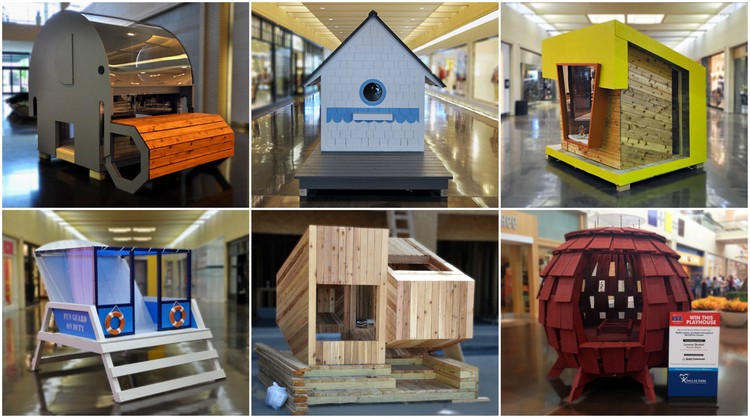 For the first two years, Borson organised the competition as part of the American Institute of Architects (AIA) and simultaneously started spreading the word on The Life of an Architect. Since the website allowed for a greater outreach, in 2012 Borson decided to give people anywhere in the world the chance to design playhouses for the charity. In line with the project’s expansion, the jury went from selecting two winning playhouses in 2010 to five in 2016.

For those who want to get involved, the guidelines are fairly simple. The only requirements relate to size, but that doesn't mean the competition is easy: effective playhouse design is deceptively complex. To determine the winning entries, the jury asks a number of questions: “Does it need to be an enclosed structure? What function would it serve over time? How would it age? Would people want this in their yard? Would a kid actually want this? How could we build this within the budget constraints and still keep the concept intact? Is it dangerous?”

Given that contractors donate money and time to build these playhouses, the designs shouldn’t be overly burdensome. But purpose remains essential. Children’s interests change, and so the design must be useful beyond the first few weeks of excitement when the playhouse makes it to the winner’s backyard.

Accordingly, Borson’s own designs included a “Lantern Playhouse” to illuminate a garden at night, an “Outdoor Movie Theater” to screen films either inside or outside, and a “Birdhouse” that could be reused as a working place, a storage shed or a deck. In 2015, competition-winner Tyler Murph similarly gave his design a lasting purpose; “the Reading Room” acts as a small-scale library, featuring a nice lookout as well as some bookshelves for storage.

This year’s winning projects “Lookout” and “Continous Window” also combine elegant design and possible pragmatic use with playfulness – a criteria that designers surprisingly often forget. As Borson says, “too often architects and designers new to the process think that they should design a playhouse that is shape- and form-driven with the idea that the child who ultimately uses this playhouse will assign their own idea of what a playhouse should be... but kids don't work that way. If they see some amazing architectural shape or playhouse that looks like a monkey house, they'll go for the monkey house every time.”

Designs with more evocative shapes are thus often rewarded. For instance, 2015 winning designs “Ellie the Elephant” and “Fun Guard Beach House” reinterpreted elements of childhood imagery to create environments for play. In fact, colorful and fun-shaped exteriors open opportunities for gathering, learning and exercising. Good examples include from 2016 include the cylindrical “Love and Peace,” the sloped-roof “Basecamp” with its climbing-wall, and the yellow playhouse “Say Cheese!” with its circular openings and indoor tree to “instill values about nature.”

This design strategy of allowing more creative and original playhouse shapes helps to maintain interest in Dallas CASA’s project each year. Yet such a cheerful palette of playhouses could probably not exist with a jury of grownups alone – which is why Borson consults “age specific playability experts and generational style docents” to select the final entries.

Borson’s design competition show that “architects have a skill set that lends itself to charity.” More than just conceiving a fun playhouse, this project is about giving time to help children in need, with all funds raised from the raffle going to Dallas CASA. If you are interested in designing a playhouse for charity or want to learn more about Bob Borson’s action within the Dallas community, check out his blog The Life of an Architect. The raffle ticket-winners have just been announced and playhouses should make it to their new homes soon, meaning more photos and interviews from this year’s winners to come. 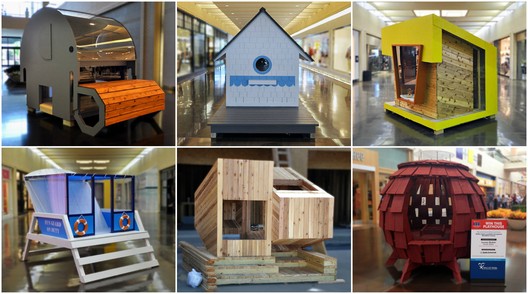