Save
The War Over Water: This Dystopian City Design Was Inspired by Current Trends in Resource Extraction
Share
Or
Copy

It’s the year 2036 in Generic City, a gloomy place where once mighty skyscrapers are lucky to be in decrepit condition, if they haven’t already been swallowed by the ever-increasing number of sinkholes appearing throughout the city. But the city is not lifeless: a constant hum echoes about the city, a well-choreographed churning motion in pursuit of one central activity. In this city, the world’s most precious commodity—not gold, not diamonds, not even black gold but just simple, fresh water is under the total control of a mega-corporation named Turquoise. The people are ruled by an oppressive autocracy and life is divided between the haves and have-nots. Life revolves around access to water.

Is this the opening paragraph of the latest dystopian novel? No, but it might be Joshua Dawson’s interpretation of our troubling future. With CÁUSTICO, an ode to the growing tradition of “speculative design fiction” pioneered by countercultural avant-gardists of the 1960s (think Archigram, Superstudio and Archizoom) Dawson exaggerates the implications of current social phenomena for the purposes of rhetoric. While the truthfulness of his vision is a little on the improbable side, the work is an eye-opening narrative on the increasing scarcity of fresh water. At the same time, Dawson’s dystopic vision opens a conversation about the relationship of the architect with utopianism, while his representational techniques brings up the question of what exactly the work of the architect entails. 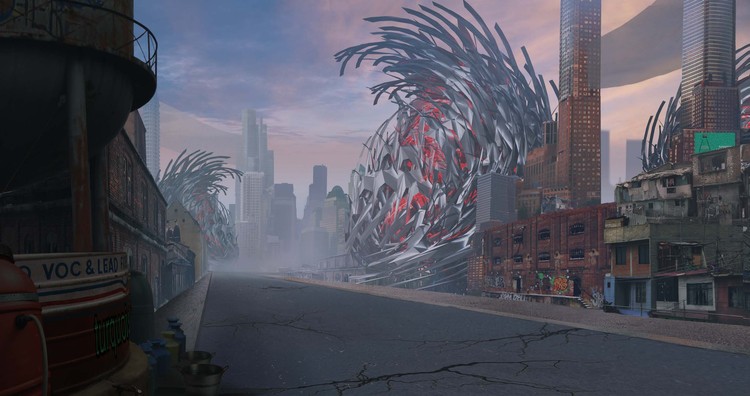 The project’s 5-minute video clip begins with a moody sequence that looks like the usual B-roll for an apocalyptic film, but in contrast to this surrealist vision, Dawson aims to address the very real and very tangible problem of water scarcity. In support of this, his clip is populated with curated audio from actual news reports on water privatization, climate change and groundwater mining. As Dawson explains:

Water is the Blue Gold of the 21st century. Due to increasing urbanization, the continued rise of the population, shifting climates and industrial pollution, fresh water is becoming humanity's most precious resource. Multinational corporations are stepping in to purchase groundwater and distribution rights wherever they can and are driven to commodify what many feel is a basic human right.

Worldwater.org reports that historical armed conflict over freshwater resources extends as far back as 3000 BC in Ancient Sumer, which highlights just how crucial and important fresh water is. A well or spring within your city’s borders decided whether one would survive or perish in a siege. In the global market of the 21st century, drinking bottled water has become a widely accessible but somewhat wasteful commodity—you can freely enjoy Perrier from France, San Pellegrino from Italy, or Fiji Water from its namesake. However, this ceaseless extraction does come with a price to pay. A number of large metropolitan areas have experienced drought-like conditions in recent years. Quite spectacularly, as California faces its fifth consecutive year of drought, mega conglomerate Nestlé continues to extract as much as 36 million gallons of freshwater from its national parks, all to the tune of a $524 yearly permit.

Dawson predicts that this continued extraction will produce the new landscape of the future—cavernous sinkholes, and subsidence which will cause buildings to lean like the tower of Pisa. These new contexts give birth to the architectural typologies of the future: water tanks, siphons, wells, and subterranean mansions along with a new pattern of economic zoning that is articulated through verticality. With water so central to Dawson’s envisioned future, its private owner, a mega-corporation named Turquoise, becomes the governing power in the area and controls all of development. With Dawson’s Indian background in mind, it’s not difficult to perceive that the city of Gurgaon, a suburb of New Delhi where governmental planning is replaced by corporations with carte blanche, may have served as an inspiration for this view of urbanism.

Dawson himself mentions that CÁUSTICO was inspired by Liam Young’s Corporate Dystopian Cities, which is also another way of saying that the renderings are not likely to become reality. Speculative works such as these reformulate the common narrative of the modern architect as a utopian visionary, instead presenting an outrageously negative future as a service to mankind—a warning to society, and a call take more control of the built world. While none of the visualized architectural representations will ever be constructed, they contribute towards an improved built environment by inciting discussion. The fascinating contradiction of dystopian narratives is how they highlight the ceaseless opportunistic spirit of man to conquer any environment, with architecture and construction as a primary tool. Consider the advanced infrastructure found in your favorite dystopic novel which served as the lifeline of a struggling group of rebels, or the rickety shelter that was the only beacon of hope in a character’s desolate world. Heroic narratives rarely evade architectural discourse.

But is this architecture? Many might be tempted to say no, citing the project's embrace of speculative fiction rather than concrete reality, where the real domain of architecture lies. But is that how restrictive we’d like to think architecture to be? What’s interesting about Dawson’s presentation is the lack of an architectural entourage to populate the renderings. Under normal circumstances, these human figures with carefree expressions contribute to the presentation of an architectural vision. With scenes like visibly happy children running in a plaza they show how life is improved by this design, convincing the audience that the architect is doing their job—they’re making lives better. This is why representation is not only an integral and necessary tool but also the actual product of architecture—a concept that Beatriz Colomina has been known for supporting. The speculative architect is still an architect.

Instead of this entourage, Dawson has provided a series of dialogues with fictional residents of the city, and they are effective. Instead of visual cues to paint a story of how a building affects the user, there is vivid storytelling to achieve the same end. The technique remains comfortably within the architectural toolbox: non-architecture is that which has no affect on humans and that certainly isn’t the case for Dawson’s design. In spite of its downright impossibility, what makes this project significant is how it impacts upon human life, and creates a conversation between built form, society and our individual lives.

We understand the architecture profession as that which is primarily concerned with innovations that will improve society and life of man—this is the heroic tangent that architecture has followed since the days of the 20th century avant gardes and the formation of CIAM. In this case, should it be required that architects produce tangible and concrete innovations (buildings) in pursuit of this endeavor? Josh Dawson’s work seems to be the antithesis to that. Many fear that architecture is losing its relevance, but projects such as Dawsons suggest that in fact architecture is simply expanding its reach.