The world's tallest timber tower has topped out this week, standing 53 meters high in the Vancouver skyline. The 18 story building, designed by Acton Ostry Architects, began construction in November 2015 and has since opened the floodgates for a new wave of mass timber towers. The building, which has been erected at record speed, will house 404 students as the Brock Commons Student Residence at the University of British Columbia (UBC). Offsite-production and the careful coordination of trades saw it rise at a rate of two floors per week, with the official completion set for mid-2017.

The building utilizes a hybridized construction model, with concrete cores and prefabricated steel elements assisting the mass timber frame. Lateral and vertical stability is gained from the combination of these material elements. In order to meet the new seismic design requirements for the 2015 National Building Code of Canada, steel connectors are fitted to the glulam columns to provide direct load transfer between the columns and a grid of cross-laminated timber (CLT) panels.

Crucially, the glulam columns and the CLT panels were prepared offsite, allowing them to be installed immediately as they arrived at UBC. Structurlam provided the mass timber package, and their engagement in the early stages of manufacture design allowed the process of lamination to be optimized. In their press release, the project team said that the assembly of the building was "like Lego"; the individual elements were all so carefully planned, they fit together perfectly.

CNC machinery and heavily refined 3D information allowed a level of precision that was integral to this perfect assembly. The careful preparation taken in the pre-production stages ensured that the building stuck to its ambitious timeline - one floor every three days - with virtually zero wastage.

The four trades working on the erection of the tower had to work together perfectly in tandem, with no team jumping ahead of another. The 8 week completion time for the mass timber structure will go down as a significant milestone in construction, setting the standard for the completion of other wooden buildings.

The rise of timber towers was inevitable, as the benefits of wood as a construction material are plentiful. Aside from being a sustainable building material that stores, rather than emits, carbon dioxide, the lower amount of energy that is consumed during fabrication also lowers its carbon footprint. The construction methodologies are now catching up with its potential, meaning that we should be seeing mass timber construction becoming more and more common over the next few years.

For more information and some early construction images, check out our feature from earlier this year. 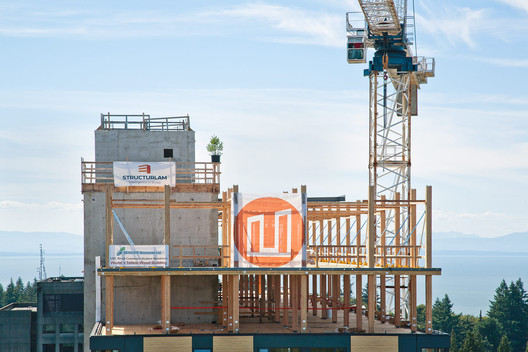