Save
Zumthor's LACMA Design Suspended in a Rainbow of Fabric at the 2016 Venice Biennale
Presented by:

At the 2016 Venice Biennale, Peter Zumthor has put his designs for the Los Angeles County Museum of Art (LACMA) on display for the professional community. Inside the Arsenale building, a model of the tar-pit-inspired building has been suspended to float within a curving display of textile artworks by Christina Kim, while a soundtrack by Walter De Maria – “Ocean Music,” written in 1968 – provides a rhythmic backdrop for the installation.

Continue for more on the exhibit, featuring images by photographer Danica O. Kus. 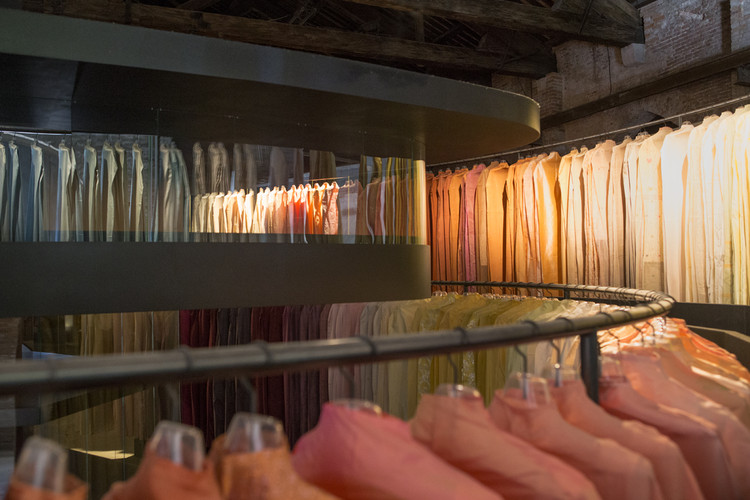 Rather than bring along artwork from LACMA to exhibit alongside the model, Zumthor and LACMA director Michael Govan selected artist Kim to create a textile artwork consisting of two curving rows of fabrics in a gradient of colors. The fabrics are picked up in the reflection of the model’s continuous glazed wall, where they serve as an abstraction of how the collection of paintings and artworks will contrast with the museum’s dark gray concrete shell.

Kim has previously worked with both LACMA and architectural themes as a participant in Wear LACMA, in which Los Angeles-based designers were tapped by the museum to create pieces inspired by LACMA’s permanent collection. Kim’s label Dosa created a 10-piece collection inspired by paintings of Simon Rodia’s Watts Towers.

The Arsenale exhibit also contains a small set of site plans and architectural drawings of Zumthor’s design, as well as a calming presence in the form of a bamboo garden.

Other images (including a photograph of the museum’s section drawing) can be seen here. A review of the display by LA Times Architecture critic Christopher Hawthorne can be found here. 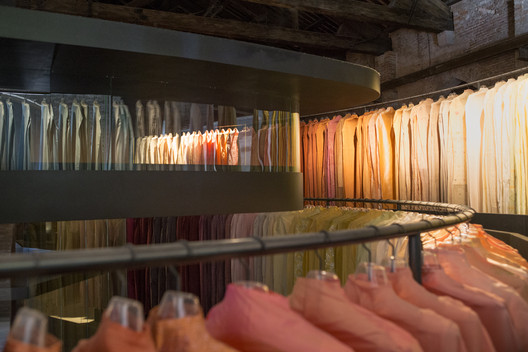