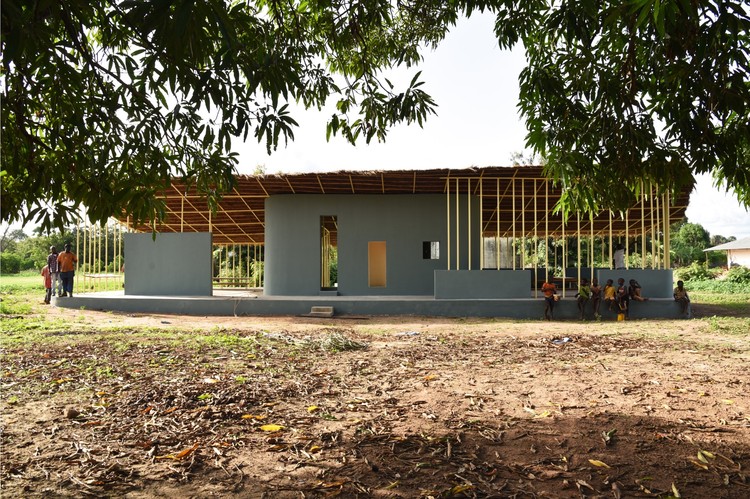 We thought of this project watching the environment, the sun, the marks of the rain, the wind and the children. In Guiné-Bissau our concepts are abstract.
There the architecture is made up of two parts, inner space and outer space with transitional space codes.

The interior is intimate shelter!
It’s a place for protection, dark, windowless and small. It's mass and matter.
The exterior is the stage of all happenings! Outside bodies are washed, hair is cut food is prepared and eaten, one remains expectant watching the action that unfolds in exterior of the houses, people play, talk, grow up, marry.

These two spaces, indoor and outdoor are limited by the coverage that is the maximum expression of vernacular architecture.The cover protects the interior from rain, the exterior of the heat and marks building in Nature.

Concept
We took the lesson from “djemberens”, a cover that houses a “djumbai”. That cover houses the action, of a child painting the tree that sees projected on the curved wall of a child who discovers two distinct sounds when walking the steps with different materials. of four children who discover their reflection in the mirror and they laugh. of other children running through the narrow walls that resemble a maze and do not see another one that hides in a small niche of two dozen children aware listen to "The Silence of the Agua" from J. Saramago in the room open to the cashew trees. Mass and matter at service of children, stimulating them. A Garden space where birds fly and sing, and so do children.

The project is developed according to the North / South axis in its larger facades, considered the most favourable orientation in order to control insolation. The spaces largely open and covered help ventilation and prevent overheating. The large sloped roof protects the structure during the rainy season. The kindergarten buildings integrate with school pre-existing buildings, and promote the control of exterior spaces, forming the ground for the school environment. The project respects Nature integrating wherever possible the pre-existing trees and enjoying their shading as part of the project.

The choice of materials was based on the observation of the various local construction systems, resource efficiency, durability and use of the local empirical knowledge. The constructive options solve and prevent problems such as overheating or flooding, termite invasion and degradation caused by the use and the strong climatic characteristics. We used a mixed structure of iron and wood profiles, which limits the space and support a thatched cover.

The kindergarten is prepared at its base to house 100 children divided into two shifts, 50 children per shift and follows the defined dimensions of 1,5m2 per child dimension to which we added 1m2 of covered outdoor space. Each room is designed for a maximum of 25 children, and in those cases where it is necessary to accommodate 150 children, the space grows, forming another room.

The whole project is designed in order to involve the community from the first moment of conception to materialisation of the proposal, with the objective to promote ownership and identification of users with the equipment that we propose.