Architecture Research Office and FilzFelt have teamed up to create ARO Block, a series of modular acoustic tiles that provide sound control in a customizable, easy-to-install system. Generated from remnant material of FilzFelt’s CNC cut products, which are often times small, ARO Block not only creates distinct felt tile patterns but also prevents leftover fabric from going to waste.

The tiles are available in 63 wool felt colors, and several geometric shapes such as triangles and irregular four-, six- and eight-sided figures. Put together, these tiles additionally create geometrical voids.

Since 2008, we have been committed to our reuse policy, notes FilzFelt’s co-founder and Vice President of Marketing and Communications, Traci Roloff. All offcuts and remnants produced during our manufacturing process are collected and repurposed into sampling, products, or sold to customers requiring smaller quantities. As our manufacturing volume has increased, we’ve been challenged with finding new uses for our remnant inventory. Our company has made efforts to seek out design and production partnerships to establish new uses for our remnants. 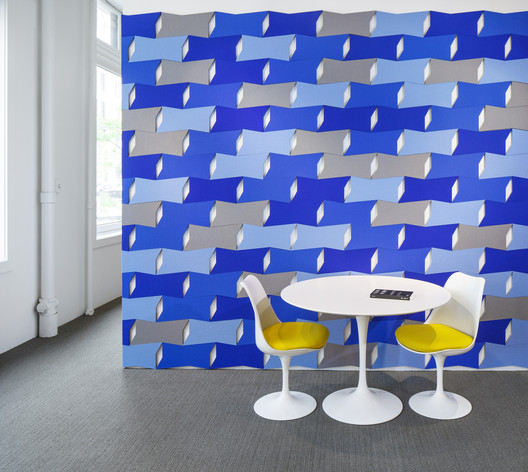