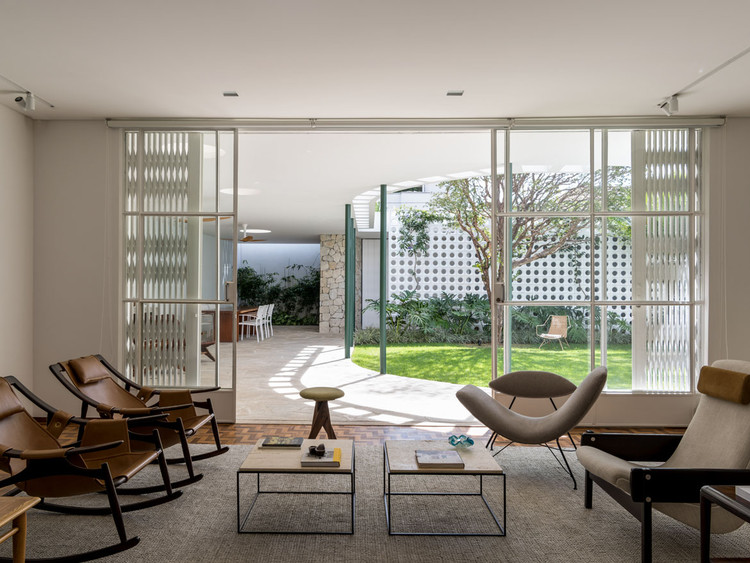 Text description provided by the architects. Originally designed by modernist architect Zenon Lotufo in the late 1940s, this house passed through a total renovation and expansion to host the new family and become up to date with contemporary way of living. Initially a ground house with ‘butterfly’ shaped roof, the construction received a new upper volume, a little outbuilding and the use of the frontal part has been completely redesigned.

The project aims to elevate the original elements, such as the bicolor wooden floor, the windows ‘iron grades, the pantographic door and the external finishing that have been completely recovered and restructured, in order to valorize the original architecture. The plan was object of great adaptations, with the construction of new bathrooms, new divisions and sectorization and the creation of a new staircase, which leads to the new upper floor, holding the study and the home cinema. Following the organic shapes of some elements of the original design, such as the marquise and the water tank, the new upper volume, delicately lies on the main volume, in complete harmony with the rest of the construction.

The marquise, initially the garage, grew and gained a new purpose. It is the new main entrance, besides hosting the barbecue, the external dining and living with the fireplace, entirely integrated to the garden and to the indoor living room.

New skylights join the existing ones, emphasizing the use of natural light, together with the opening on the roof close to the barbecue, illuminating a small garden.

A new garage, on the front side of the lot, hides behind a new hollow bricks wall, reminding of the modernist architecture, creating an organic background to the garden, alongside with the upper volume and the marquise´s curves.

A little outbuilding in the backyard, literally embracing the guava three. The brick wall reminds the original disposition of the bricks on the lateral sides of the house. This disposition is used in the external new wall too.