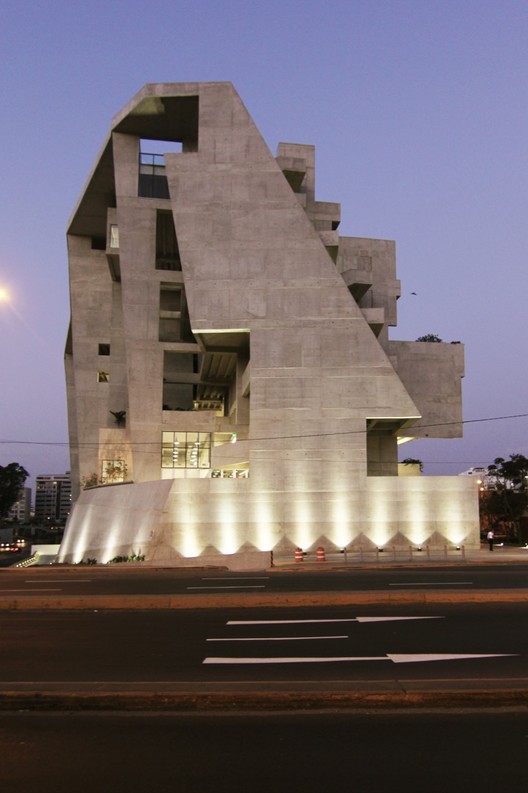 Text description provided by the architects. The project for the new University of Engineering and Technology (UTEC) building is located in a lot in the district of Barranco facing Malecón Armendariz on the oceanfront, Almirante Grau Avenue, Medrano Silva Street and Enrique Barrón Street. The project consists of reinforced concrete structural plates perpendicular to Malecón Armendáriz, among which the different project environments such as classrooms, laboratories, offices, gardens, etc. are developed. The geometry of the structural plates with an "A" section and the composition of the volumes responds to the search of Grafton Architects to create a "man-made cliff", a topography that is integrated with the surrounding environment. The project includes green areas for student use on various levels and creates attractive interior circulations for the user.

The whole building has 10 floors with a large garden area at level 06 and the roof at level 09. The plates with an "A" section lean toward Malecon Armendariz, while the project is staggered towards Barranco to join the scale of the surrounding buildings.

The unique condition of Lima is the point of origin for the design. The dramatic relationship between Lima and the sea, huge cliffs that define the boundary between the city and the sea, the green valleys turned inland from the sea to the city, all these features were the starting points for the project. The UTEC site is part of one of these green "fingers" that connect the sea with the city. Given this location, the project for the new UTEC campus is conceived as a "man-made cliff," a continuation of the cliffs at the edge of the sea, clearly defined on its new location.

To the north, the site faces a system of high traffic routes but also faces a further extension of the city. The project involves the facade to the north as one of the main facades of the proposal, visible from the surrounding city and the traffic flow, and from this point we seek to consolidate the image of the university in the public mind.

While the north facade acts as a "cliff" to a fast moving city, the south facade is staggered over a series of gardens that seek to integrate with the lower urban scale of this part of the district of Barranco. From the first level to the "loggia" on the highest point, the landscape is woven throughout the building. The landscape faces the south predominantly, but it is integrated with and visible from the north facade "cliff". The project represents the obvious juxtaposition between what is created by man and what is organic. The entry of natural light is spun through the sections. The landscape of the campus is carefully defined in relation to the humidity of the environment, with taller trees on natural terrain; smaller trees on classrooms and a desert of stones is proposed for the "loggia" level. The landscape is integrated into the design of the south facade for this facade towards Barranco to have the appearance of a vertical garden.

UTEC, the University of Engineering and Technology, is a new campus which integrates a graduate school and a cultural center. The project has an auditorium, research laboratories, classrooms, research offices, a library, meeting rooms and social areas which include a theater open to the general public, a movie theater, exhibition spaces, a café and a restaurant. Located in an area which faces on one side the rapid transit Armendariz Avenue, while on the other a residential scale, the project proposes a structure of scale to face the avenue, with a contrasting series of terraced gardens towards the smaller scale urban area. The public circulation of the building occupies the volumes and spaces towards the street with a dramatic relationship with the city and the sea. In contrast, the teaching environments are oriented towards the gardens and terraces overlooking Barranco.

Educationally, this layered vertical strategy connects the site with the sky. We have placed the public cultural environments of the university, theater and cinema, on the base of the "cliff", marking the perimeter to the avenue. These are accessed from the main public space at level 1 and these environments along with the cafeteria seek to encourage cultural social interaction with a wide audience.

The student information center and centralized staircase further animate the main entrance space. A large dining room faces this entrance and to the west, to the terraces and the sea. Special laboratories are not hidden, buried, rather they are exposed as exhibition spaces, positioned in the heart of the project, involved with the daily movement of the campus, central to the spirit of education.

Larger scale volumes are located close to the ground, with the teaching, administration and offices for teachers areas staggered at higher levels. In the upper levels near the roof is the library, with panoramic views of the city and the sea. Level +6, along with the first level and roof are also considered as areas of great social importance. This level enjoys large free areas, large laboratories with cafeterias overlooking social spaces and landscape on the terraces.

As one ascends at various levels, the relationship with the city continues. The entire sequence of movements provides framed images outside the boundaries of the sit to wider horizons. The "nose" or "bow" of the campus is oriented towards the sea.

The main circulation hall facing the avenue and the city benefits from the orientation toward the sun and at the same time protects the educational environments from the noise pollution from the avenue. The wall towards the avenue becomes stronger with the presence of environments as "beams", occupied by spaces overlooking the circulation area.

The terraced teaching areas and vegetation create a microclimate, allowing pleasant environments for meeting and rest on the terraces and sheltered areas of circulation. The stepped section provides shade in the summer to public spaces and teaching areas and allows natural light to penetrate into the building during the winter. We have worked with lighting studies to ensure the proper level of natural light on cloudy days.

All laboratories, classrooms and teaching environments have cross ventilation. The exposed structural thermal mass will be used to cool and to delay heat transfer during the hottest days. The location and use of the building constitute the project as an urban landmark. 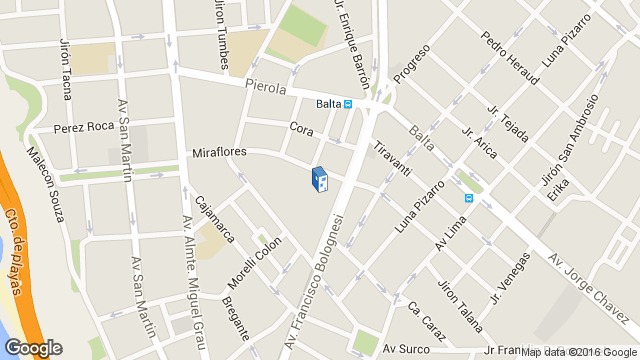