JR is an anonymous artist who owns the biggest art gallery in the world. His exhibits are available on the streets, free of charge catching the attention of people who are not typical museum visitors. His work is thought provoking and mixes art and act.

JR is known worldwide for projects such as Portrait of a Generation (2006), Women Are Heroes (2008), and Face 2 Face (2007). The latter is a piece which through portraits of people made with a wide angle lens, printed in large scale and pasted on city walls was able to generate a reaction from the public. 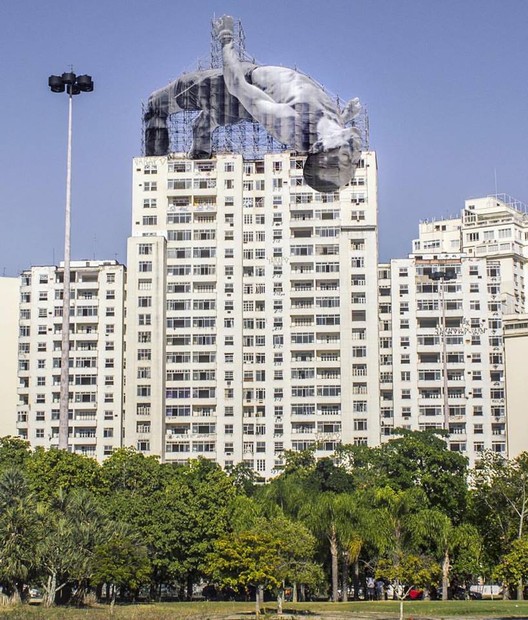 The first is an installation on the Casa Amarela (a cultural institution founded by the artist himself nine years ago) where JR created a metal sculpture in the shape of a crescent moon. The second is a large image of Sudanese athlete Mohamed Younes Idirss, who specializes in high jump, jumping over a building.

The latter was performed using a new technique developed by JR in which a metal scaffold structure supports a printed fabric with the image in question. The technique had been tested previously in Rio de Janeiro showing a human figure in a position of "flight" with its arms open when viewed from the back.

In addition to these works, also in Rio de Janeiro is one of JR's photographic booths from his Inside Out Project. This piece allows the public to take pictures of themselves in the same style and format as JR's emblematic works.