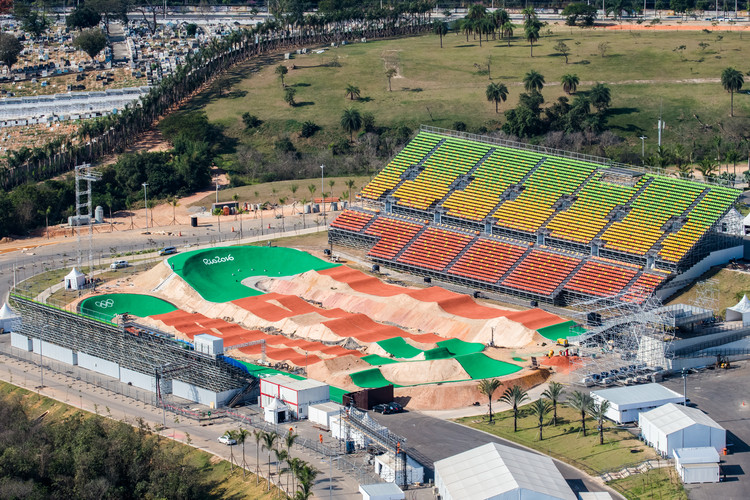 The Olympic Canoe Slalom Stadium is considered the most complex structure built for RIO 2016. Designed by the architecture firm Vigliecca & Associates with the consultancy of Whitewater Parks International, the project aimed to create one of the best Slalom Canoe competition channels in the world. It also focused on being very economic to operate, specially once in legacy mode. It is the first artificial whitewater course in Brazil.

The mandatory use of an artificial circuit for the practice of Canoe Slalom at the Games began in 2000 in the Sydney Olympics since more predictable parameters needed to be established.

Instead of opposing the difficult topography of the site the Olympic Canoe Slalom Stadium takes advantage of it. The equipment was placed in the least sloped area of the site in order to balance the earthwork. Already the stadium seats, which will be installed for the Olympics, follow the natural slope of the land. In its legacy version, this slope will function as the park seats themselves.

One of the main challenges was to create a strong rapid with the ideal slope recommended to practice the sport. In order to get rapids with these characteristics, it would be necessary to pump water from a height of 10 m, which would heavily burden the operation.

In order to attend the needs of the Games and also ensure a sustainable operation in legacy mode, Vigliecca & Associados, along with Whitewater Parks, made ​​a careful analysis to be able to pump water for the shortest possible time and still have quality rapids. The solution, already used in the 2012 London Olympics, was improved and refined. This analysis included hydraulic tests at the University of Prague, a reference in research in the area, in order to assess the behavior of water and the designed moveable obstacles in the rapids. The analysis was done using three-dimensional hydraulic digital models and a large hydraulic physical model, which provided the necessary detailing for all of the surfaces and obstacles.

These studies have also shown that it would be possible to operate the whole system with less water than previously expected, resulting in water savings and an overall reduced construction costs.

The Olympic Canoe Slalom Stadium has two channels: a 280 m competition channel and a 210 m training channel. The depth ranges from 1.80 m to 2.40 m. The structure of the competition channel is in precast concrete, which allows better quality control of the finished concrete. The 25,000 m³ lake/reservoir, the pump house and the starting pools were built in in-situ reinforced concrete. The obstacles were attached to concrete tracks found on the bottom of the channels.

This facility once in legacy mode will be adapted to be used as a recreational area. Security structures and floating decks will be installed at the lake in order to restrict public access to deeper areas and technical areas. In the Radical Park there are intentions of installing the Family Clinic and the Knowledge Ship. Once in legacy mode, the Slalom and BMX administrative buildings will be used to house environmental education activities, community events in addition to an administration office for the park.

The goal was to create a very contemporary and challenging BMX track. The project was designed by the architectural firm Vigliecca & Associados consulted by the company Elite Trax, the same who built the BMX track for the 2008 Olympic Games in Beijing, year the sport debuted at the Olympics, and the track for the 2015 Toronto Pan American Games.

The BMX track for the 2016 Rio Games has been designed considering local topography and the prevailing winds, features that can interfere with the performance of the athletes. The track is made of clay and an extremely thin asphalt in the corners. Ripples were placed at intervals of 10 meters to give route options to athlete such as the option to jump every 10 meters at a higher speed or to stay at ground level at a lower speed. The track has a 350 meters circuit for women and a 400 meters circuit for men, covering an area of ​​about 4,000 m².

The start ramp, unlike other BMX tracks around the world, was built as a permanent element with great visual impact, lined with wood and finished with multiple non-slip adhesives.

Synthetic grass was used in steep areas between the tracks in order to prevent erosion. Around the facility and in support areas it used natural grass. The circuit will feature a temporary grandstand with 7.500 seats during the Olympic Games, which will be installed near the date of the event due to maintenance. In legacy mode, the professional BMX track will be kept, but restricted to athletes. A beginner’s track will be built for the general public.

The infrastructure project for the Mountain Bike Olympic Park was done by Vigliecca & Associados. It includes local connections with other areas of the Deodoro Sports Complex, a heavy flow of people, interaction with the track itself, outlining the overlay and back of house areas, studies on the grandstands and the starting and finishing lines of the circuit. The track was designed with the advice of ex-cyclist Nick Floros and Rogério Bernardes, a specialist in the construction of mountain bike tracks.

The Mountain Bike circuit is 4.9 km long and is located in an area of ​​19.200 m². This circuit will be completely redesigned once left as a legacy. The part of the track that is in army-owned land will be dismantled; the other section, assigned to the City of Rio de Janeiro by the Army, will be reconfigured to become a smaller mountain bike circuit. 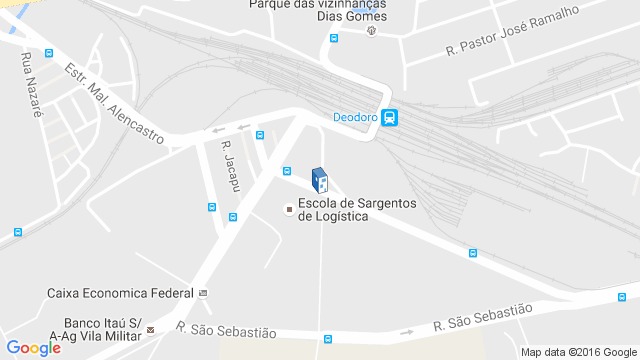 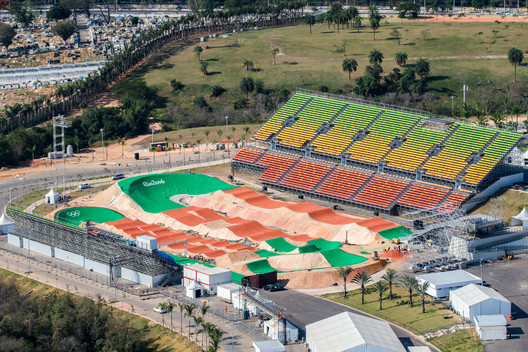