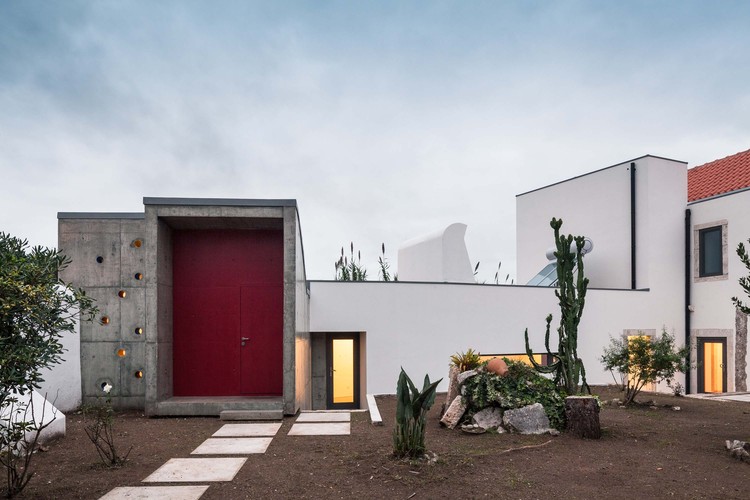 Text description provided by the architects. Three principles lay down the rules behind the intervention which are: the proportions of volumes; the plans metrics and the use of colour.

It was developed has three different dwelling areas, united morphologically and structurally through the treatment of void areas and zenithal windows. This spatial organization unites and creates living spaces and transit spaces in which the dichotomy between the different types of spaces are revealed through the character of the voids itself. Like a thread stitching the intervention giving a new dynamic to the existing spaces.

On the ground floor, the metrics of the space was kept and was introduction a new large window in the entrance hall, framed by a concrete volume, like a box to make time known by the user of the space. This window attempts to join two gardens which were so far apart visually but almost together physically.

In the other side of the building we take advantage of an old kitchen, creating a connection zone between the old container (the main volume of the old house) and the new concrete volume painted in red. It is through the redesign of the façade, introducing a longitudinal window, preparing the kitchen volume to the inserting of the new form taking advantage of the plastic quality given by concrete to introduce a curve line, which serves as a locking volume for the intervention. Here close to primary colors were introduced in the interior of small round windows and on the façade. The earth incarnated tone serves as to remind the torn of an animal that curves to enter the old form paying tribute to the pre-existing form. Color is introduced as an experimental approach to test how can it change the perception of space and volumes.

In the first floor was reintroduce the metric of the ground floor but now correspondence with different living spaces. Black shade is used to prepare for more private rooms. Ceiling heights are amplified or reduced in order to reference pathways, giving it a more solemn space through its different heights. A main volume (a closet) which encloses the bedroom space creates a dressing space in one side while in the opposite side a horizontal tear of modernist nature takes on the contemporary nature of the new spaces. 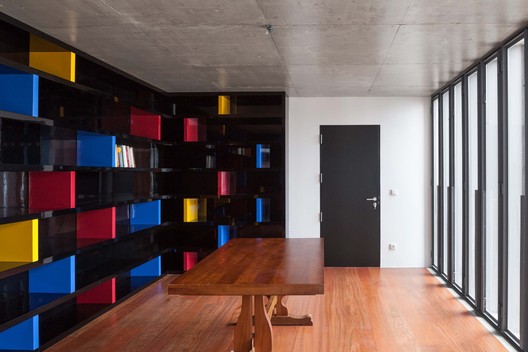