Text description provided by the architects. The Three Ancestors (sanzu) Cultural Museum is located in the Zhuolu county, Hebei Province, in the northern part of China.With a total construction area of 9174 square-meters, the Architectural Scheme contains areas for experimental exhibition and combination spaces for office use. The fine construction has been the future landmark for the Zhuolu county.

The Convergence of Three Ancestors & The Blending of The Culture

Zhuolucountyis one of the cradles of the Chinese civilization, in which is the melting pot for the three Chinese legendary ancestors of Huangdi, Yandi, and Chiyou. The three collective Chinese cultural layers ofHongshan, Yangshaoand Hetao were integrated from here. Morevover, three important battles were triggered by this cultural collision, which were the battle of banquan, zhulu, and hefu. Since then, the Chinese nation wentfrom secession towards solidarity. In line with this, the new Museum will be divided into three portions, and physically shape into a converging pattern, in order to symbolize the gathering of the three legendary tribes, as well as the Chinese civilization.

Cultural Evidence for the Three Ancestors

At a time of the stone age, the stoneware was the only material carrier for the human beings. The ancient cultural marks could be explored and traced from the unearthed cultural relics. By imitating the raw physical form of natural stone, the new Museum is endeavored to create a powerful spirit of the place, and to formulate the shape, power, and soul of the Chinese dragon – the Chinese Icon. The appearance of the architectural built-form is grand and magnificent, which implies the culture of Zhulu in reflection to the Chinese cultural context. By using the natural rough stones on the surface of the building,the new Museum is echoing the environmental characteristics of the ancient civilization, highlighting the three ancestral cultural characteristics and charm. Just as the unearthed stone artifact, this new construction will lead you into the exploration of the ancient civilization.

The New Earth Landscape, The Integration with the Environment

The architectural scheme is ultimately generated from the nature building environment and derived from the local conditions. The new construction is reproducing the Chinese civilization through its neo-geometric shape, anddefinitely, echoing the whole landscape pattern. The new Museum in the future willnaturally and smoothly embed into the surrounding environment. The reconstruction to some extent will create the organic landmark together with the natural environment.

The elevated viewing platform, which is the highest level of theMuseum, activates the new horizon of the top view, particularly, enhances the spatial dynamics. The manifestation of the architecture and environmentwill conform the most aesthetic beauty in thearchitectural landscape.

The Cultural Palace of the Harmony Hall (Hefu)

Three individual blocks of the new Museum, forming an experiential construction of time and space. The central courtyard enclosed by three blocks symbolized the harmony, vitality, as well as the unity. In addition, by reference to the Chinese dragon cultural pattern, the three separated blocks in the central location of atrium spaceare connected by three bridges, which implying the process of Chinese civilization from secession towards solidarity. The lower ground floor of thecentralcourtyard is simulating the ancient period of the three ancestors, regarding the settings, such as the stone carving on the wall and sculptures interior, in order to render the historical atmosphere, further building up the cultural palace of the three-ancestors. The whole architectural model, including the three individual blocks and the central courtyard, is echoing the herring-boned building pattern in the three-ancestor period, so as the semi-subterranean dwellings. 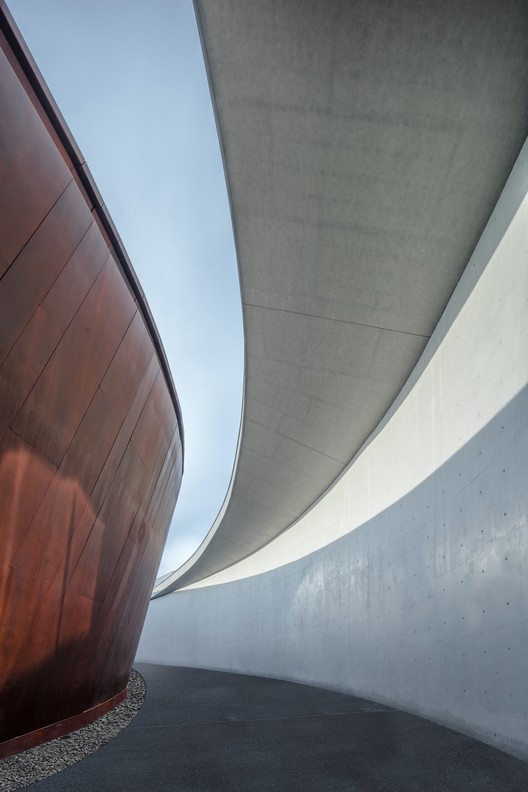