The Obama Foundation took a different approach to finding a site than past presidential foundations have taken, deciding to build in an up-and-coming part of town as opposed to an established city center. Jackson Park is surrounded by the neighborhoods of Woodlawn, a predominantly African American community, and Hyde Park, which is already in the throes of gentrification.

The selection has not come without controversy, however, as opponents believe the Library could have provided a greater impact at the Washington Park site, which is currently surrounded with several vacant sites. Friends of the Park, the park advocacy group that recently succeeded in driving the Lucas Museum from its proposed lakefront Chicago site, also expressed their disappointment that the library will be built on park land. Both Jackson Park and Washington Park were designed by 19th-century landscape designers Frederick Law Olmsted and Calvert Vaux.

The Obama Presidential Library is scheduled to be completed by 2021 and will cost an estimated $500 million. The project will feature the library housing the presidential archives, a museum and headquarters for the Obama Foundation.

News via The Chicago Tribune. 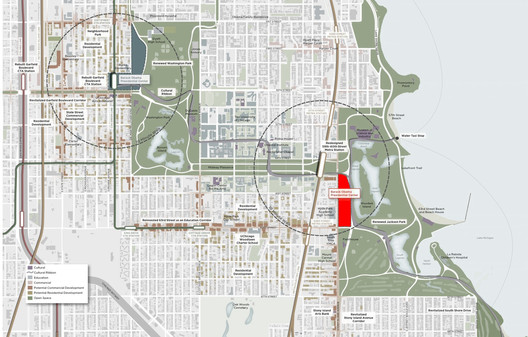