Norway’s Public Roads Administration have begun conducting feasibility studies on the installation of what would be the world’s first floating underwater tunnel system. Norway is famous for its fjords, whose incredible depths make traditional bridge building a costly headache. Instead, the most common way to traverse them is through the use of ferries, a system that is both slow and subject to harsh weather conditions. As a result, engineers began looking for a new solution.

The “submerged floating bridges” would avoid these issues by being hung from floating pontoons on the surface and stabilized with trusses, and then sunk 100 feet into the water, a depth large enough to allow for passing naval ships overhead. With minimal above water presence, the tunnels would preserve the landscape’s natural beauty.

Each bridge system would consist of two tunnels for traffic in either direction, like many of the 1,150 traditional traffic tunnels already found in Norway. Officials claim the experience of being inside the tunnel would be no different than in those standard tunnels.

The project has been estimated to cost upwards of $25 billion dollars, with a potential completion in 2035. Studies on how environmental factors would affect the system have just begun, and will determine whether or not the project will receive funding.

Find out more about how the tunnels would work here. 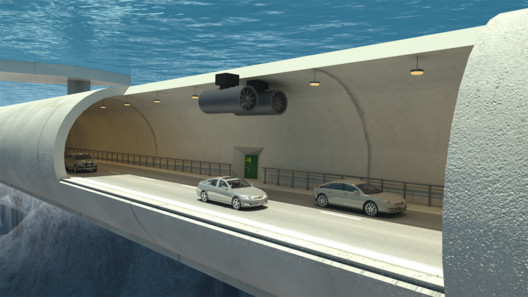