A proposal from AM3 Architetti Associati with Cannone Architetti uses the flow of the natural landscape to create a theater cut into a cliffside in Cefalù, Italy. Situated at the base of the Rocca di Cefalù, the new theater had to respect the importance of both the historical, man-made structures and the greatness of the cliffs and rocky outcrops. The first prize winning design plays with the existing naturally occurring amphitheater, "S. Calogero cavea", adding a series of lightweight interventions to create a new cultural attraction. 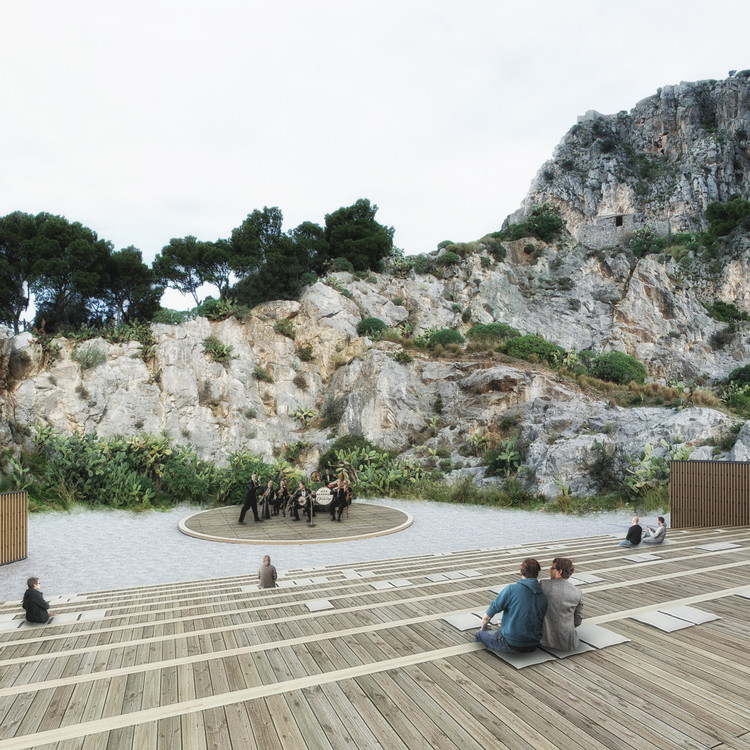 The limestone present throughout the site is referenced by the large circular clearing, which resembles a quarry cut into the jagged landscape. The sparse, untamed vegetation that litters the rock face remains the only flora present, ensuring that the new additions don't look overly manicured. Within the circular clearing, a semi-circular 'cavea' - the seated area of an amphitheater - rises at a low gradient, with it's highest point closest to the sea.

The internal amphitheater that this arc creates between the rising cavea and the rock face gives a sense of semi-enclosure, as all focus is directed internally. At the focal point on the clearing, before the cliffs begin is a circular plate which acts as the theater's singular stage. The timber pad has the cliffs as it's backdrop, and can house theatrical, musical, or other cultural performances. The stage can be used recreationally or professionally, and is serviced by the dressing rooms located below the cavea.

The amphitheater is capped on its uppermost ledge by a path which circumscribes the new theater. Accessible by stairs next to the entrance, the path provides users with a panoramic "mirador" which faces the shore and sea. At the end of the arc, the path extends beyond the clearing and onto a neighboring peak in the cliff face. Another three flights of stairs snake upwards on the cliff face opposite the timber amphitheater, giving access to the original rocky cavea.

The use of oak gives the entire scheme a sense of weightlessness, as the thin layers of wood are laid with gaps between to allow light to pass through. The lightness is reiterated in the reuse of the excavated limestone, which creates a subtle blanket of gray stone across the clearing. The incision of the design into the existing landscape is made seamless by the color, geometry, and transparency of the chosen materials, as well as the sweeping form of the cavea which circumscribes the natural plateau.

News via AM3 Architetti Associati. 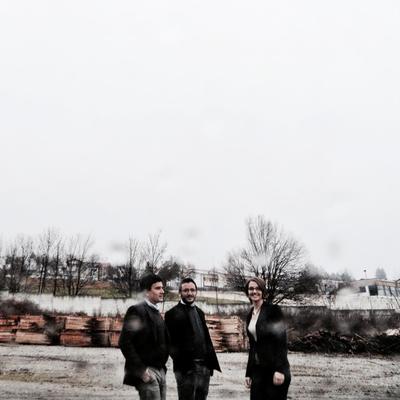 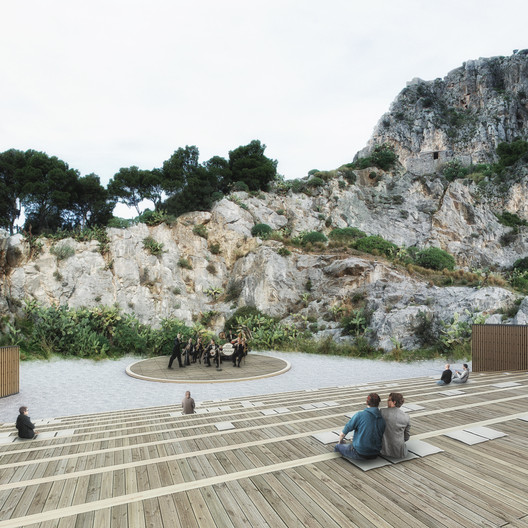