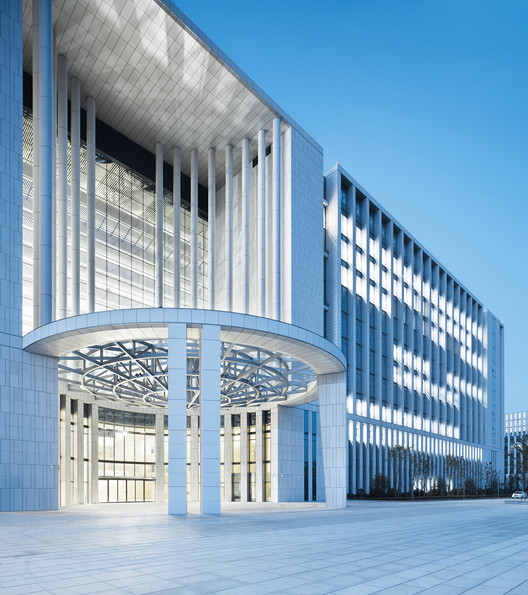 From the architect. If we say that the cultural mechanism of a city does not lie in simple repeating of the past and resolute refusing of the past, but lies in rooting in the past and constant restructuring and creation, then for every sincere architect, cultural inheritance will become an instinctive mission and only from which can they acquire the value of their existence.

Jimo Scientific Creation Center is a beneficial attempt of gad – how to meet the “science and innovation” spiritual demand of architecture itself while respect the urban culture context at the same time?

During the four-year-long project exploration of Jimo Scientific Creation Center, together with the proprietors, gad wishes to jump out from the unitary urban architectural thoughts and tries to demonstrate a complete spatial sequence from the perspectives of historical context and new town plan.

The design extracts quintessence from the time honored Qi-Lu Culture, and the guideline of “City of Neutralization, Centre of Nature” is put forward, laying a philosophy foundation for the core center of the entire Creative Intelligence New District. While the Scientific Creation Center presenting to us finally is like a long scroll lying across the square, being stable yet elegant.

As the core architecture governing the Creative Intelligence New District, the architects discard the pursuing for vertical scale at the beginning of the design, following the horizontal development of classical square construction scale. Now we can see the Scientific Creation Center is 286 meters long and 49 meters high, forming a favorable interface scale with the entire central square and showing an extensive bosom which can incorporate things of diverse natures.

The neat-formed and fair symmetry of the Scientific Creation Center can make you feel stable and calm, and the classical facade ratio of five sections horizontally and three sections vertically reveals an inexpressible noble temperament, while the smooth and succinct techniques give you a bright and clear modern impression. The artistic conception of vertical lines extracted from the famous geological impression “Mashan Stone Forest” of Jimo brings strong order for the entirety.

In the centre and both ends of the entire facade, the inward retreat of the surface and the dangling handling for the vertical lines seem to want to imply the uniqueness of the internal spaces of these parts through the “transparency” raised by Colin Rowe a hundred years ago.

Space Peculiarity of Opening and Sharing

The three-tier-high round porch at the main entrance, the spoke-shaped glass porch roof, 16 independent pillars of 35 meters high together with the single cable curtain wall of nearly one thousand square meters behind them introduce people to enter the pillarless atrium space of 50 meters high.

The opening and sharing space under the neat-shaped appearance make the techniques of internal and external space uniformly interpret the centrality. This is the centre of the Scientific Creation Center as well as the centre of the overall Creative Intelligence New District. It connects the front and back squares from the south and north, joins the both internal courtyards from the east and west, with conference rooms of each layer suspending above it and the lecture hall and dining hall lying beneath it.

The aluminum alloy window-shades hanging like draperies show the giant Chinese character of “Ren” (which means human in English), manifesting the human-oriented spirit of scientific innovation. The pure-white floating and hazy feeling creates rich and profound visual flow by pure and skillful techniques.

The atrium and courtyard effectively organize each office space, and the horizontal extending gains more southward open space, improving the comfortableness of office environment. Sharing and communication are the most strong space demands of modern office architectures. The corridor above the atrium, the selected conference rooms and multifunctional halls and the two-tier loft space at the east and west sides provide convenient and comfortable communication sites for the enterprises, hoping to create more possibilities for stimulating unknown values among enterprises.

Standing at the north square, the tranquility and elegance of the Scientific Creation Center reflect before our eyes. The modular facade design makes the thinness of metal, the transparency of glass and the heaviness of stone just right, showing powerful order and convincing accuracy.

When the evening lights are lit, looking back at the fading Jimo Scientific Creation Center on your way back, the light of the atrium is reflecting the comely porch, like an altar, which we know is not too much, because what there worships are science and innovation.

Just as what Koolhass said “Architecture is almost the last industry which is still chasing the time memory, or the last industry which will still trace back to thousands years ago and try to show the certain relations throughout the history.” As another active attempt of propelling new city construction, gad is exploring the cultural memories peculiar to the city in its own way. 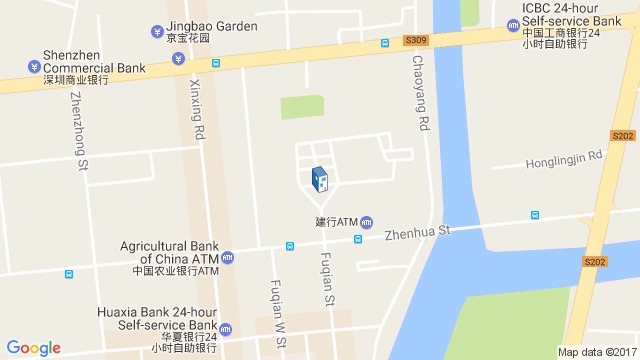