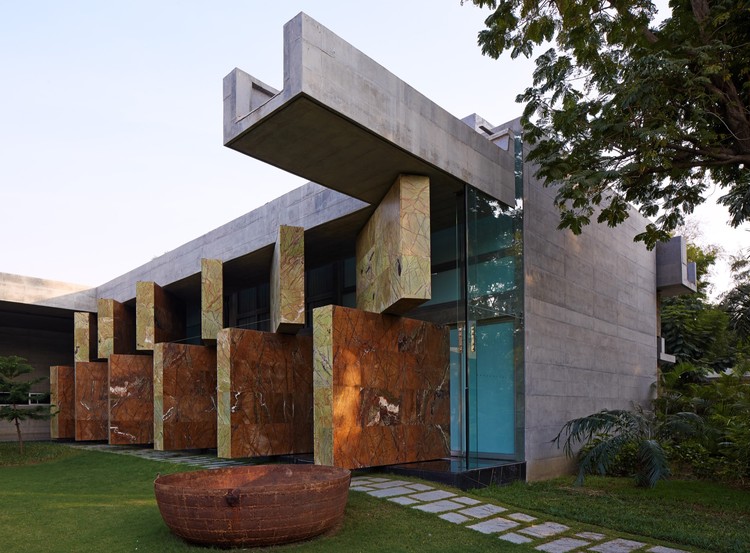 The idea for moving landscape germinated from stumbling upon a stone, Bidasar Forest, that possesses an impression, as if, of tropical arid landscape fossilized within itself. Its polished surfaces against the native verdure of the Ahmedabad region made for the perfect setting, blurring the lines between reality and illusion.

The nations booming economy in the last decade has made individual houses accessible to a larger section of society. Coupled with the demand for an independence that protects individuality, the age old tradition of joint family living has disintegrated into small nuclear families. Despite this change of cultural attitude in the present Indian context, a large number of families, bound by family business and obliged by traditional ingrained values, still choose to live together. Whilst this allows them to benefit from shared responsibility across generations, it often leads to the creation of autonomous suites within a house that isolates families even under the same roof. The challenge therefore lies in simultaneously integrating the requirements of these opposing lifestyles - making it equally imperative to provide opportunities for communal collision, while providing privacy.

Situated on the outskirts of Ahmedabad, the house is meant to accommodate one of the city’s most prolific real-estate developers and his wife, along with his two sons’ families and extended visiting members. The client also shares the grounds with his two other brothers’ houses and their joint families in a large 20000 m2 plot.

The plan of the house is interpreted as a linear pavilion, ensuring that every space in the house is lined with glass on the facing sides – the first enclosure. The rest of the structure is in 200mm thin walls in concrete, eliminating the need for any beams and columns and making for cleanest interior volumes. Additionally, this saves constructed dead space by about 3% and for the 18,000 total covered area, this equals to 540 sq.ft or the size of an average sized room.

This pavilion is oriented around the margin of the site as three wings. The flanks holds the house’s private spaces with suites for each of the sons’ families, while the central one hosts the living space for all communal activities. The residual corner voids by the turning of the blocks, are snugly protected by tall circular walls to form smaller sheltered spaces – while one cradles the houses’ utility space, the other acts as a court distant from the joint families gaze. These also carry the staircases and lift, rendering outer spaces clear of all encumbrances for the Bidasar drama to unfold. The composition as a whole footprint defines a large multi family courtyard at the heart of the site.

The second enclosure is a layer of massive 15’ high, 9’ wide and 1’6”mm thick Bidaser stone walls along the entire perimeter – an impregnable shell. Akin to the amethysts hard exterior cracking open to reveal its crystalline heart, at the push of a button, this imposingly heavy stone wall cracks open, as it becomes an array of panels spinning gently about their centres or sliding away to reveal a transparent cocooned interior. Can be employed at will whenever desired and dissolved when not.

This layer of stone panels help create a buffer between the inside and the outside, protecting the inner layer shell of concrete and glass from intense sun light and 45o heat, thereby reducing the total heat gain on the air-conditioning. Moreover, this space doubles up as passages, verandahs, entrance vestibule and circulation space, and also as protection from rain, eliminating the need for air-conditioning in 8000sq.ft out of a total of 18000 habitable space. This saving is substituted with enhanced living and direct contact with nature in what we term as value architecture.

Savings from the air-conditioning and sealing the house, is then channelled into making inhouse custom designed motorized pivots and giant sliding systems. Architecturally and structurally both, this entire layer is kept completely detached from the inside structure, almost as a heat buffer, and is only supported on hidden structures within in the sliding and pivoting systems, making for the awe in having thick concrete slabs floating on moving stones.

Lights are machined out of alabaster stone providing for the most natural ambience.
Most furniture is bought out from various design houses in Italy and a sole bar table is one custom designed by the Architects. It is a 3 dimensional mobius strip in stainless steel, locally fabricated, that can be subject of discussion and intellectual discourse after a couple of drinks. Lights and water under the moving walls light the water to make the heavy stones appear floating on water.

Toilets too open on opposite ends and the water closet, the shower and the basin, all three are positioned on 3 side of the duct, the fourth side left for easy service access and ventilation to the duct from outside.To carry on with the material & weight amazement further the thick concrete basin counter is cantilevered from the floor to ceiling mirror. In line with the same philosophy of the easy maintenance and serviceblity AC units have been kept on the roof with just holes cut in slab for blower. This approach of integrating the services and interiors in construction itself doesn’t only make it easy to service; it also saved a lot of time off construction. The entire building was ready in 18 months time from start to furnish.

Resonating with the harshest aspects of nature, in motion, these walls intermingle with the glass inside and the wild landscape outside, the third enclosure, to sometimes allow a glimse of the outdoors, sometimes reflect it and sometimes reflecting themselves. It is in this layering of space and screen, the houses’ entire envelope becomes an interface to mediate between the artifice of the inside and verdant site outside.

The houses environs look deep inside their interior, as the house merges into an illusion of landscape constantly moving that we sometimes catch ourselves reflecting amongst, reflecting on the nature both within us and outside of us. The epitome of their experience is to be found at the entrance passage of the house, where all of these reflections find the surface of water to make the landscape a truly moving one. 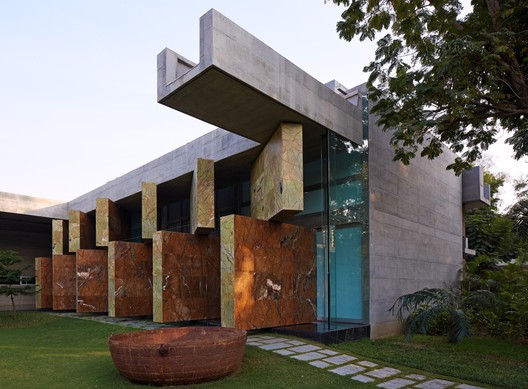