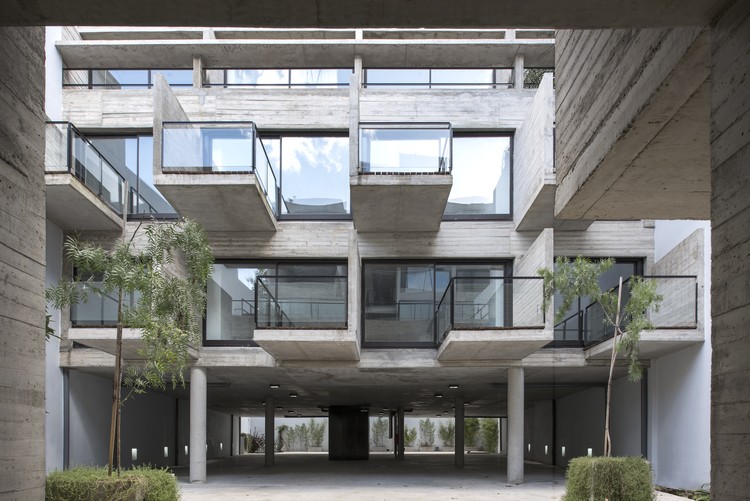 Text description provided by the architects. Armenia Building is located in Palermo Soho, a neighborhood in the city of Buenos Aires. Due to the gentrification process occurred during the last decade, Palermo Soho was renewed and became a gastronomic, cultural, commercial and touristic hotspot, which has raised real estate prices in the area.

The building is situated on Armenia Street, an average width road lined with aged trees.

In order to profit from the area’s potential, an investment group commissioned an apartment building with a row of stores on the ground floor. The building should be composed of a varied set of apartments. While the commissioners intended most of them to be lofts that could be temporarily rent out to tourists, the more spacious unities (one, two, and three-bedroom apartments) would be sold as permanent residencies. It was requested the project should include common areas, green spaces, a solarium, and should also be endowed with water presence. With respect to materiality, the clients already knew the Studio’s career regarding the esthetics of its works and its experience in the use of exposed concrete. They considered it fit for the project not just for esthetics reasons, but also because it requires minimum maintenance.

The project synthesis developed a building organized in two compact blocks linked by a patio in-between that would function as the heart of the design. The blocks’ height was determined by the code’s zoning: ground floor and four other floors. According to the code’s requirements, the different floors on the front block are organized in steps ascending inwards. This structure is mirrored by the block in the rear so that better insolation, air and views may be achieved, falling backwards on the upper floors and generating an opening towards the central patio.

The Studio’s intention was to avoid this space’s confinement, so the ground free floor plan connects the street area, the central patio and the backyard. Receded from the building’s facade, the double-height stores set in the front expand the sidewalk space. Among the stores’ interstices is located the entrance to the building, with no closing physical barrier other than a fence that allows the passing of air into the rest of the condominium. The air going through the whole floor plan softens the transition between the public and private spaces.

Regarding the floor plan’s organization, both blocks area arranged over an orthogonal grid. This grid is bilaterally set on both sides of an axis that cuts through the trapezoid drawn by the site. Each block has its own circulatory nucleus and both lie on this same axis.

Along with the site’s geometry, the diverse typology requested by our customers and the intention to achieve well lit and aired homes endowed with good views were the project’s main challenge.

Regarding the facade, a brise-soleil system composed of vertical partitions and horizontal eaves was designed to function as a sun control artifact that would also shelter the apartments from the view from the street.

Apart from the central patio, for which natural forestation was designed, the condominium has a common use solarium and reflecting pool on the second level that lean over the patio.

The central patio has semi covered spaces that may be used as parking slots, but also there is a garage and private storerooms on the underground floor that can be accessed through a car elevator.

When the construction was already well advanced, the commissioner acquired the lot next to the building site to incorporate it into the project and the original design needed to be adapted. New stores were included on the front and the new apartments (which were now thirty four) were integrated into the existing structure, making use of the circulatory nucleuses developed for the original project. The brise-soleil system was adapted so that it would serve as an integrating element with the new building.

The exposed concrete is present all over the building shell, as well as in the common areas, the circulatory nucleuses, the slab bases and both the indoor and outdoor floors, made of smooth concrete. In contraposition, inner partitions are plastered brick walls painted in white. While the apartments’ framing is made of dark bonze anodized aluminum, black steel was selected for the front framings, the internal structure supporting the stores’ mezzanines, and the rest of the forges. 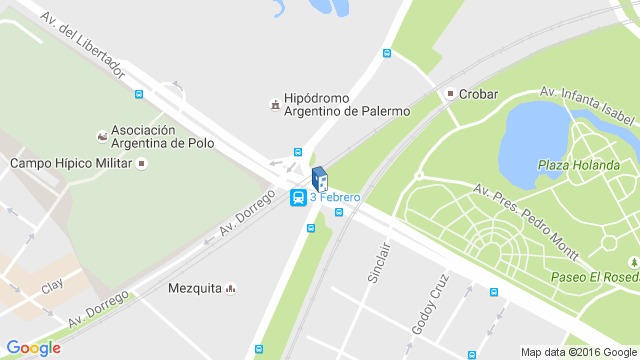 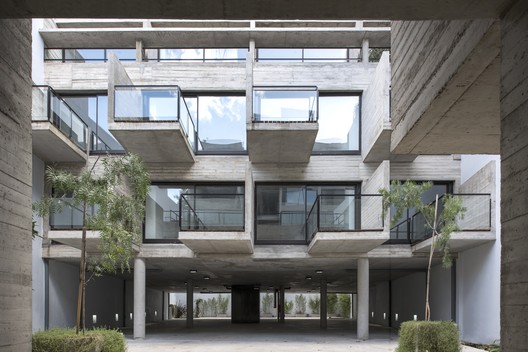