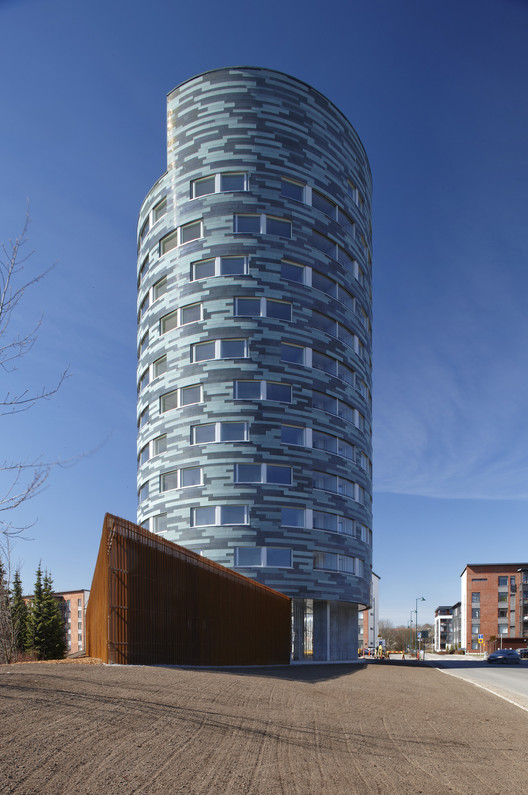 Text description provided by the architects. The city of Turku has gone through many changes during its 700 years of history and architecture reflect different stages of that history. The last stage in architectural progress, newest modernism, is exhibited by Ikituuri student apartments. The copper tower was designed by Architecture Office SIGGE Ltd. It is an oval 12 story building with copper facades manufactured by Luvata Pori Ltd. These Green Living facade cassettes give the building a streamlined and extraordinary textural feel and look.

An architectural competition was held and the winning entry by Pekka Mäki’s Sigge Ltd was awarded the commission. The building site is situated between a main motorway and Turku Student Foundation’s student home townscape. The Ikituuri building is to be used as living quarters, but in the townscape its function is also to be a land mark.

The building mass is divided into two parts; Basement and tower. In the triangular basement there are rooms for HVAC and bicycles. Staircase and elevator are in the middle and  rooms are situated in a radial way along the corridor along them.

In each level there are eight rooms, singles and doubles, 30-45m2 in area. Each of them has a glazed balcony. Noteworthy is, that the oval form also feels and shows clearly in the interior of the apartments, but without causing any difficulties in furnishing or decorations. The way the apartments are designed gives a thrilling feeling. In the topmost floor there are a conference room and a sauna and a large sun deck. The deck is visible in the facade form and finishes the tower in an elegant way.

The colors of the building are springing partly from the materials. The foundation is covered with rusty red steel net and the tower growing above gets its color from the pre-patinated copper. The patina looks and feels natural as the copper ages, but is industrially made and the color is sustainable.

Architect Pekka Mäki has arranged the lighter and darker copper cassettes so that the lay-out gives the oval a dynamic feel.

In the interior the architects have used strong color effects: The staircase is painted in concentrated green, the bicycle garages oval concrete wall have a luscious red color as well as the kitchen cabinets. Otherwise the living quarters are painted in light color which’s gives the dwellers good possibility to decorate the rooms according to their own tastes.

Ikituuri is an interesting building also when considered its building physics. The oval form causes a sail effect and works like a stationary rotational sail. The on molten concrete frame was quite simple to make strong enough, but the mounting of the copper cassettes is specifically constructed so that both winds suction strength and the coppers ability of electrochemical attack are considered. Therefore the mounting grid is build of stainless steel profiles.

Ikituuri is also geothermally heated. The process is bi-directional. In wintertime it produces heat and in the summertime the geothermal wells are used in cooling by pumping the warmed air loads back into the wells in the bedrock.

C´est Si Bon, It Is Good

The representative of the Student Foundation of Turku believes that the decisions have been correct regarding the use of copper and technical questions. Also the use of geothermal energy gives an ecological advantage and is also a question of sustainable development.

And so Turku got a new landmark situated near the motorway. The dwellers are getting more value, not only trough a modern home, but also having a chance to live in stylish and modern building with exceptional architectural design with copper facade. 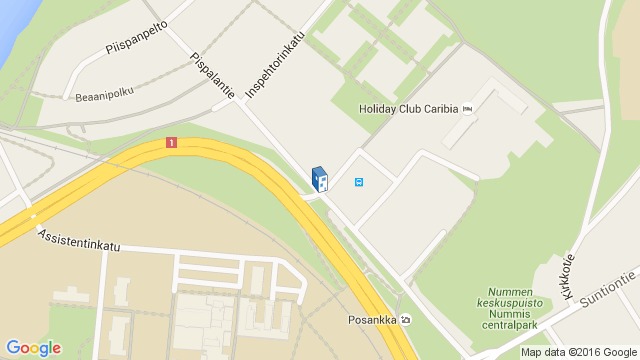 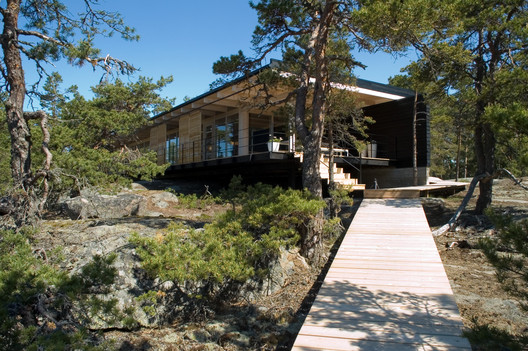