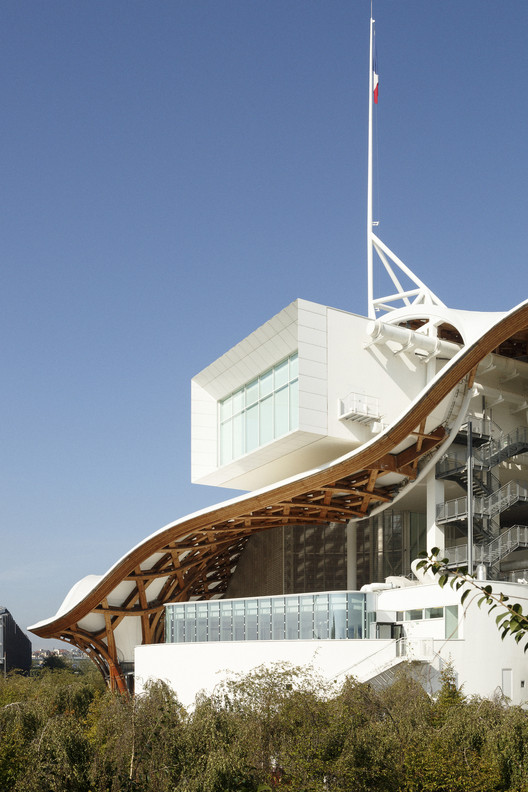 Text description provided by the architects. Finished in 2010, the Pompidou Metz center imagined by Shigeru Ban quickly became an architectural icon not only for the city of Metz, but also for the region and even the country. Given the important number of visitors to the Museum and the restaurant, the need for more inside eating space on the terrace soon became apparent. However, the idea of intervening on an existing building does not come without important implications regarding architectural integrity ― the intervention will indeed modify the façaces and volumes of the existing structure.

How can a 100 sqm extension be thought and built onto the Pompidou Metz Centre? A mere “feather” compared to the bold and colossal building. What would be the best way to intervene on a masterpiece such as this one, and which positioning should be adopted?

Our response was to distance and detach ourselves from the existing architecture. This independence remains, from our point of view, the best way to solve issues of identity and amalgam between coexisting architectures. Our approach strives to be precise and elegant, as we deeply respect Shigeru Ban’s work. Our addition to the building respects its heritage and character, while at the same time giving it specific meaning and identity.

The volume is formed of a glass monolith, clear and light ― making it radically different from the Museum in terms of architectural vocabulary and choice of materials (i.e. the use of wood, large white shapes and framed windows).
The façades, abstract and intangible, are materialised by the reflections forming onto the clear shapes. The roof seems to be non-existent, as its edge is hidden by the windows.
Thirty-three thin white blades form an enveloping structure around the compartment.
The new room does not strike us as an extension, but as an autonomous object appearing to avoid contact with its environment. The museum’s integrity is preserved as the new structure simply sits in place ― and could one day be easily removed, if need be.

The atmosphere created by the new architecture is a microcosm formed with the terrace and its surroundings. Although the lines forming the architectural volumetry are simple and pure, we have chosen to a bolder approach when it comes to the choice of materials; three local artisan trades were invited to work on the project, in an effort to connect the building with the Lorraine region.

Glass and Crystal
Throughout the ages, the Lorraine region has been renowned for mastering the art of glass and crystal manufacturing.

The façades of the new space are made of large glass volumes, some of which are curved and held together onto the metallic frame by a cloud of dots. The shiny rounded shape can be seen as a tribute to the glass-making expertise represented in the Lorraine region by Emile Gallé, Daum, Baccarat, Saint Louis and Meisenthal.

Ceramic and Earthenware
From Lunéville to Saint Clément and Lonwy, the art of ceramic, enamel and earthenware making has also been an important cultural heritage of the Lorraine region. We can find a reference to this trade in our choice of flooring, which forms a perfectly continuous pattern running between the terrace and the floor of the restaurant.

Textile and weaving
The development of the textile industry in the Vosges region through the 19th and 20th century is also exploited. We were particularly interested in the patterns generated by the singularities of the weaving techniques, which make the fabric so distinctive. A large white curtain is there to envelop and shelter the inside space when required, notably to avoid direct sunlight or over-heating problems. This unique piece of work was weaved in the workshops of the “maison Garnier Thiébaut” in Gerarmer (Vosges region). The white fabric reveals its geometric pattern subtly and almost imperceptibly at certain angles only, through different states of shininess of the white thread.

Through these three different kinds of surfaces (glazing, flooring and veiling), the three Lorraine traditional trades find themselves both united and confronted by the contemporary graphic matrix of the pattern, created in collaboration with the graphic designer Morgan Fortems. 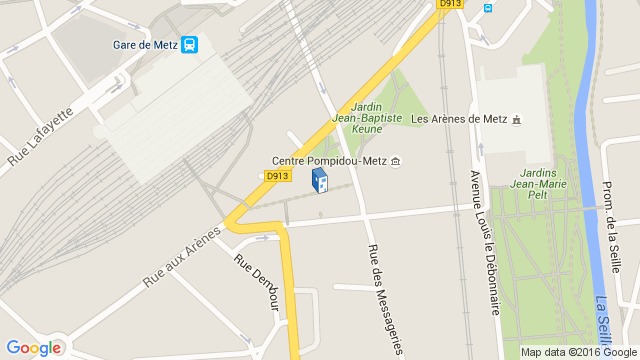 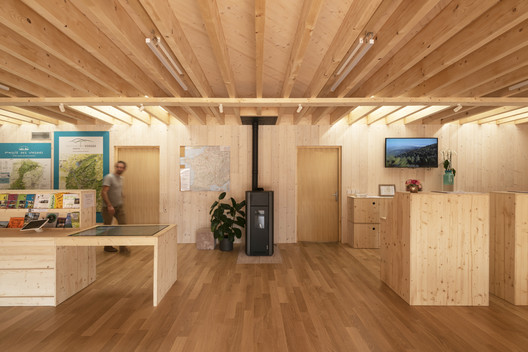