Found in places as diverse as the Zhangjiajie Grand Canyon, Willis Tower, and Tokyo Skytree, glass bottom observation decks have become the favorite engineering marvel of thrill seekers looking for a new perspective on the world. Now, the U.S. Bank Tower in downtown Los Angeles has upped the ante for adrenaline-spiking structures – affixing a glass side to the building’s facade. Spanning from a window on the 70th story to a terrace on the 69th, the 45-foot-long chute opened to the public on Saturday, providing those brave enough to ride it with unprecedented views of the city.

The slide is made of made of four-inch-thick clear glass, and was designed by M. Ludvik Engineering. It constitutes the most daring part of Gensler’s $50 million renovation to the Harry Cobb-designed tower, which at 1,018 feet (310 meters) has held the distinction of tallest building in LA since its opening in 1989.

Suffering from occupancy rates hovering around 50 percent, in 2013 the U.S. Bank Tower was purchased by Singapore-based OUE Ltd., who set out to reinvigorate the skyscraper in hopes of riding the recent wave of revitalization hitting downtown LA spots like Pershing Square and FAB Park. About to lose the title of tallest tower to the Wilshire Grand tower opening next year, OUE needed something splashy to make the building stand out from the skyline. Thus, the Skyslide was born.

In addition to the Skyslide, other new facilities include redesigned lobby spaces, a café, a 54th story “transfer floor,” and a restaurant/bar, as well as California's tallest open-air observation deck. 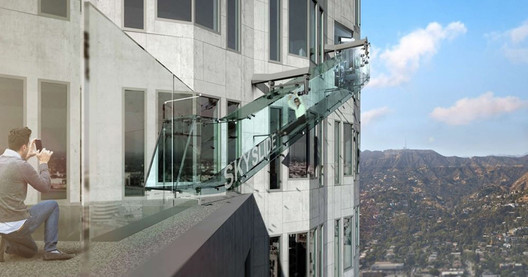