Adding to the growing trend of timber-framed architecture, Tzannes has released plans for International House Sydney, the “first modern commercial engineered timber building of its size and type in Australia.” Located in the new urban district of Barangaroo, the building was conceived as a gateway to the area, linking pedestrian infrastructure systems and providing six floors of new commercial space.

Taking advantage of the structural capabilities of timber, Tzannes’ design features a colonnade of y-shaped members, giving the building a dynamic presence from the street and providing shade and cover for the pedestrian “Merchant’s Walk.” Behind the colonnade, the seven-story building is made up of two components: a two-story base housing retail that responds to surrounding pathways, and a simple glass envelope above that allows the building’s unique structural frame to be displayed from both the inside and outside.

The building has been sited to complete the streetwall on Hickson Road, complementing surrounding buildings and acting as a transitional structure between the street and the towers to the west. The design interacts with the two pedestrian bridges flanking the project, drawing people into the ground-level public space and connecting Barangaroo with downtown Sydney.

In addition to the extensive use of structurally engineered timber, the design for International House Sydney employs recycled hardwood throughout. Noting the renewable and ecological character of timber-framed structures, Tzannes hopes that the project will be seen as a leader in environmentally sustainable design and will set an example for future development in the area. 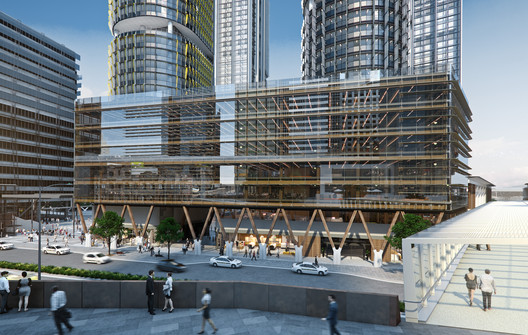