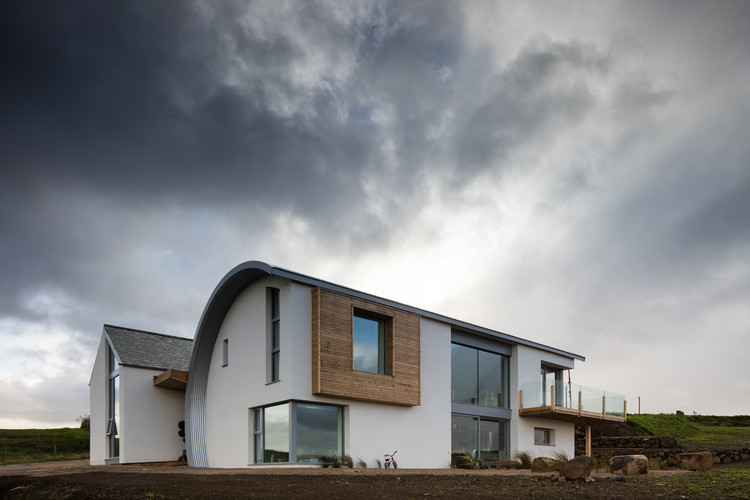 Text description provided by the architects. The site consisted of a 100 plus year old derelict blacksmiths forge and the crumbling ruins of an attached blacksmiths cottage sitting on the edge of a busy country road; however, it also benefits from some of the best coastal and rural views on the North Antrim Coast. The site is located in an Area of Outstanding Natural Beauty on agricultural land running down to the entrance of the Dunluce Castle site and has uninterrupted panoramic views from Donegal to Scotland. It is the only structure on the sea side of the road in this location. Due to its prominent location and Natural Beauty the local Planning Authority had refused the previous attempts to develop the site.

2020 Architects became involved in the project when Senior Architect Michael Howe and his Partner Michele Long bought the potential site with the hope of creating a family home. Due to the prominent nature of the site, the unique views and the area of outstanding natural beauty we knew that the design had to be an exemplar of rural design. Over the last 5 years Northern Ireland Architecture has found a confident modern voice and have begun to lead the way in domestic architectural design in the UK, supported by the fact that 4 of the 20 houses chosen for the ‘Manser Award’ were from this country. We wanted to use this project to progress this new found Architectural confidence, producing a building which was unashamedly modern but one which couldn’t exist anywhere but Ireland.

The design was born out of the restrictions of the site negotiated with the Planning Department through early consultation. The concept was conservation of the old forge and the rebuilding the ruins of the original dwelling creating a visual barrier for a modern highly glazed curved roof living accommodation block to sit behind. These two blocks are only visible together gable on; the two gables create strong basic shapes that are can be seen in the agricultural buildings throughout the Irish Countryside. 2020 Architects and the planners wanted to retain as much of the original forge as possible, conserving the character which would help to ground the design in the Irish vernacular. The curved roofed element of the extension was a solution to the need for two storeys while still being lower than the roof of the original forge. The two strong forms are divided by a flat roofed section planted as a wild flower meadow. Due to the sloping nature of the site the building increases in height as you drive along the road from west to east, this is an original feature which we wanted to use to enhance the drama of design internally.

The completed house creates a guided journey from the moment a visitor arrives on site; it unfurls slowly leading the visitor through differing scenes. The dwelling is approached from the lower western gable where the flat roof of the dividing section is at eye level and the two strong forms frame a long view over the wild flowers towards the grassed field and sea beyond, this view and stepped path guides yours approach to a very human scale front door between the two extruded forms. On opening the door a 16m long wall of natural unpainted stone pulls your eye into the depth of the house, this 500mm thick stone wall was partially rebuilt using the original stone from the site and utilising traditional stone masonry skills of cement free lime mortar. The wall is a ‘touch stone’ for the house; it can be viewed from all but one room and continually ties the modern house back to the history of the site. The wall increases in scale as you walk down a corridor created by the wild flower roof above and between the two strong competing forms of the building. The tension of these two spaces sets up much of the drama of the house, the curving wall of the modern extension pushing against the heft of a massive stone element. The stone wall is puncture as little as possible to form openings to bedrooms and utility spaces beyond. A gap through the curved wall immediately gives a fleeting view of the living spaces beyond. The house is on 7 different levels ensuring that it integrates discreetly into the undulating fields beyond, three of these levels are passed through between the entrance and the living space. 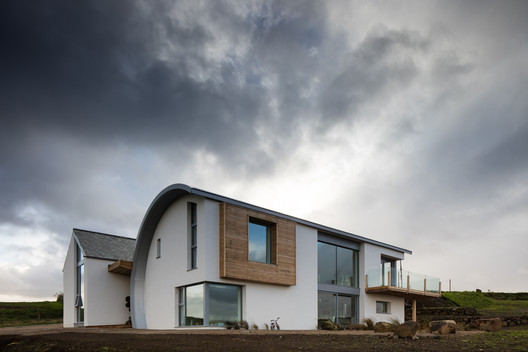